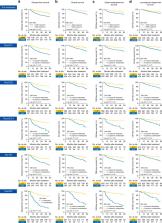 Liquid biopsies are emerging as a useful method for diagnosis and prognosis in cancer. Here, the authors show the prognostic value of monitoring the level of circulating Epstein-barr virus DNA throughout induction chemotherapy and chemo-radiotherapy and its potential utility for risk-adapted individualised therapy in nasopharyngeal carcinomapatients.

Establishment and Validation of Prognostic Nomograms for Endemic Nasopharyngeal Carcinoma