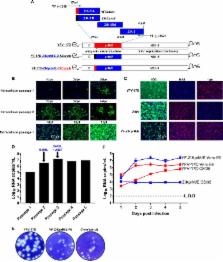 The recent Zika virus (ZIKV) epidemic in the Americas led to an intense search for therapeutics and vaccines. Here we report the engineering of a chimeric virus vaccine candidate (YF-ZIKprM/E) by replacing the antigenic surface glycoproteins and the capsid anchor of YFV-17D with those of a prototypic Asian lineage ZIKV isolate. By intracellular passaging, a variant with adaptive mutations in the E protein was obtained. Unlike YFV-17D, YF-ZIKprM/E replicates poorly in mosquito cells. Also, YF-ZIKprM/E does not cause disease nor mortality in interferon α/β, and γ receptor KO AG129 mice nor following intracranial inoculation of BALB/c pups. A single dose as low as 1 × 10 2 PFU results, as early as 7 days post vaccination, in seroconversion to neutralizing antibodies and confers full protection in AG129 mice against stringent challenge with a lethal inoculum (10 5 LD 50) of either homologous or heterologous ZIKV strains. Induction of multi-functional CD4 + and CD8 + T cell responses against ZIKV structural and YFV-17D non-structural proteins indicates that cellular immunity may also contribute to protection. Vaccine immunogenicity and protection was confirmed in other mouse strains, including after temporal blockade of interferon-receptors in wild-type mice to facilitate ZIKV replication. Vaccination of wild-type NMRI dams with YF-ZIKprM/E results in complete protection of foetuses against brain infections and malformations following a stringent intraplacental challenge with an epidemic ZIKV strain. The particular characteristic of YF-ZIKprM/E in terms of efficacy and its marked attenuation in mice warrants further exploration as a vaccine candidate.

Zika virus (ZIKV) infection generally results in mild symptoms but can cause serious developmental abnormalities in infants born to ZIKV infected mothers. Kai Dallmeier and colleagues at the KU Leuven in Belgium, engineered a chimeric live-attenuated vaccine (YF-ZIKprM/E) by swapping the glycoprotein from the Yellow Fever vaccine YFV-17D with that of a pre-epidemic ZIKV strain. YF-ZIKprM/E is very well tolerated with no adverse effects even following high dose intracranial infection. Mice highly susceptible to ZIKV infection—including AG129 and type I interferon receptor deficient strains—vaccinated with a single dose of YF-ZIKprM/E are fully protected from lethal ZIKV challenge. Protection can be achieved within 7 days and by low doses of YF-ZIKprM/E, is durable and generally results in sterilizing immunity. YF-ZIKprM/E elicits both neutralizing antibodies and robust cellular immunity. Finally, YF-ZIKprM/E can also prevent vertical transmission of ZIKV and achieve efficient protection of pups from neurological defects following intraplacental challenge.

Zika virus in the Americas: Early epidemiological and genetic findings.

Nuno Rodrigues Faria,  Raimunda Azevedo,  Moritz Kraemer … (2016)
Brazil has experienced an unprecedented epidemic of Zika virus (ZIKV), with ~30,000 cases reported to date. ZIKV was first detected in Brazil in May 2015, and cases of microcephaly potentially associated with ZIKV infection were identified in November 2015. We performed next-generation sequencing to generate seven Brazilian ZIKV genomes sampled from four self-limited cases, one blood donor, one fatal adult case, and one newborn with microcephaly and congenital malformations. Results of phylogenetic and molecular clock analyses show a single introduction of ZIKV into the Americas, which we estimated to have occurred between May and December 2013, more than 12 months before the detection of ZIKV in Brazil. The estimated date of origin coincides with an increase in air passengers to Brazil from ZIKV-endemic areas, as well as with reported outbreaks in the Pacific Islands. ZIKV genomes from Brazil are phylogenetically interspersed with those from other South American and Caribbean countries. Mapping mutations onto existing structural models revealed the context of viral amino acid changes present in the outbreak lineage; however, no shared amino acid changes were found among the three currently available virus genomes from microcephaly cases. Municipality-level incidence data indicate that reports of suspected microcephaly in Brazil best correlate with ZIKV incidence around week 17 of pregnancy, although this correlation does not demonstrate causation. Our genetic description and analysis of ZIKV isolates in Brazil provide a baseline for future studies of the evolution and molecular epidemiology of this emerging virus in the Americas.

Helen M. Lazear,  Jennifer Govero,  Amber M. Smith … (2016)
The ongoing Zika virus (ZIKV) epidemic and unexpected clinical outcomes, including Guillain-Barré syndrome and birth defects, has brought an urgent need for animal models. We evaluated infection and pathogenesis with contemporary and historical ZIKV strains in immunocompetent mice and mice lacking components of the antiviral response. Four- to six-week-old Irf3(-/-)Irf5(-/-)Irf7(-/-) triple knockout mice, which produce little interferon α/β, and mice lacking the interferon receptor (Ifnar1(-/-)) developed neurological disease and succumbed to ZIKV infection, whereas single Irf3(-/-), Irf5(-/-), and Mavs(-/-) knockout mice exhibited no overt illness. Ifnar1(-/-) mice sustained high viral loads in the brain and spinal cord, consistent with evidence that ZIKV causes neurodevelopmental defects in human fetuses. The testes of Ifnar1(-/-) mice had the highest viral loads, which is relevant to sexual transmission of ZIKV. This model of ZIKV pathogenesis will be valuable for evaluating vaccines and therapeutics as well as understanding disease pathogenesis.

Zika Virus in the Americas--Yet Another Arbovirus Threat.