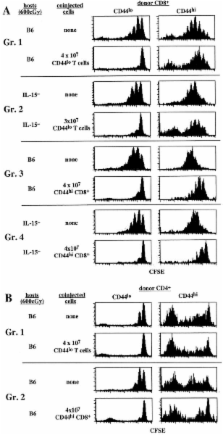 K. S. Schluns, W. Kieper, S. Jameson … (2000)
The naïve and memory T lymphocyte pools are maintained through poorly understood homeostatic mechanisms that may include signaling via cytokine receptors. We show that interleukin-7 (IL-7) plays multiple roles in regulating homeostasis of CD8+ T cells. We found that IL-7 was required for homeostatic expansion of naïve CD8+ and CD4+ T cells in lymphopenic hosts and for CD8+ T cell survival in normal hosts. In contrast, IL-7 was not necessary for growth of CD8+ T cells in response to a virus infection but was critical for generating T cell memory. Up-regulation of Bcl-2 in the absence of IL-7 signaling was impaired after activation in vivo. Homeostatic proliferation of memory cells was also partially dependent on IL-7. These results point to IL-7 as a pivotal cytokine in T cell homeostasis.

R Murray, P. Vieira-Martins, U von Dobeln … (1995)
Interleukin (IL)-7 is a potent stimulus for immature T and B cells and, to a lesser extent, mature T cells. We have inactivated the IL-7 gene in the mouse germline by using gene-targeting techniques to further understand the biology of IL-7. Mutant mice were highly lymphopenic in the peripheral blood and lymphoid organs. Bone marrow B lymphopoiesis was blocked at the transition from pro-B to pre-B cells. Thymic cellularity was reduced 20-fold, but retained normal distribution of CD4 and CD8. Splenic T cellularity was reduced 10-fold. Splenic B cells, also reduced in number, showed an abnormal population of immature B cells in adult animals. The remaining splenic populations of lymphocytes showed normal responsiveness to mitogenic stimuli. These data show that proper T and B cell development is dependent on IL-7. The IL-7-deficient mice are the first example of single cytokine- deficient mice that exhibit severe lymphoid abnormalities.

IL-7 is critical for homeostatic proliferation and survival of naive T cells.