A Glance at Aflatoxin Research in Mozambique 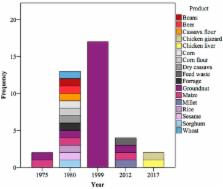 In Mozambique, aflatoxin research started in the 1960’s and has been carried through apparently unrelated efforts according to opportunities. However, they can be grouped in two sets: early epidemiological studies and recent agricultural research. Early investigators found a strong correlation between aflatoxin contamination and primary liver cancer. Since then, there have been efforts to examine the extent of contamination, especially in groundnuts and maize. More recent investigations and interventions aimed mostly to reduce the level of contamination, enough to allow such commodities to gain acceptance in the international market. The current status of knowledge is still marginal but the increasing involvement of local authorities, academia, and international organizations seems promising.

Lauren Lewis,  Mary Onsongo,  Henry Njapau … (2005)
In April 2004, one of the largest aflatoxicosis outbreaks occurred in rural Kenya, resulting in 317 cases and 125 deaths. Aflatoxin-contaminated homegrown maize was the source of the outbreak, but the extent of regional contamination and status of maize in commercial markets (market maize) were unknown. We conducted a cross-sectional survey to assess the extent of market maize contamination and evaluate the relationship between market maize aflatoxin and the aflatoxicosis outbreak. We surveyed 65 markets and 243 maize vendors and collected 350 maize products in the most affected districts. Fifty-five percent of maize products had aflatoxin levels greater than the Kenyan regulatory limit of 20 ppb, 35% had levels > 100 ppb, and 7% had levels > 1,000 ppb. Makueni, the district with the most aflatoxicosis case-patients, had significantly higher market maize aflatoxin than did Thika, the study district with fewest case-patients (geometric mean aflatoxin = 52.91 ppb vs. 7.52 ppb, p = 0.0004). Maize obtained from local farms in the affected area was significantly more likely to have aflatoxin levels > 20 ppb compared with maize bought from other regions of Kenya or other countries (odds ratio = 2.71; 95% confidence interval, 1.12–6.59). Contaminated homegrown maize bought from local farms in the affected area entered the distribution system, resulting in widespread aflatoxin contamination of market maize. Contaminated market maize, purchased by farmers after their homegrown supplies are exhausted, may represent a source of continued exposure to aflatoxin. Efforts to successfully interrupt exposure to aflatoxin during an outbreak must consider the potential role of the market system in sustaining exposure.

Alexander Huwig,  Stefan Freimund,  Othmar Käppeli … (2001)
The contamination of animal feed with mycotoxins represents a worldwide problem for farmers. These toxins originate from molds whose growth on living and stored plants is almost unavoidable particularly under moist conditions. Mycotoxin-containing feed can cause serious diseases in farm animals resulting in suffering and even death and thus can cause substantial economic losses. The most applied method for protecting animals against mycotoxicosis is the utilization of adsorbents mixed with the feed which are supposed to bind the mycotoxins efficiently in the gastro-intestinal tract. Aluminosilicates are the preferred adsorbents, followed by activated charcoal and special polymers. The efficiency of mycotoxin binders, however, differs considerably depending mainly on the chemical structure of both the adsorbent and the toxin. This review describes the most important types of adsorbents and the respective mechanisms of adsorption. Data of the in vitro and in vivo efficacy of detoxication are given.