Patterns of bird-window collisions inform mitigation on a university campus 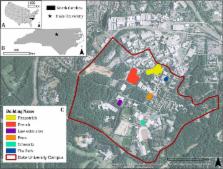 Bird-window collisions cause an estimated one billion bird deaths annually in the United States. Building characteristics and surrounding habitat affect collision frequency. Given the importance of collisions as an anthropogenic threat to birds, mitigation is essential. Patterned glass and UV-reflective films have been proven to prevent collisions. At Duke University’s West campus in Durham, North Carolina, we set out to identify the buildings and building characteristics associated with the highest frequencies of collisions in order to propose a mitigation strategy. We surveyed six buildings, stratified by size, and measured architectural characteristics and surrounding area variables. During 21 consecutive days in spring and fall 2014, and spring 2015, we conducted carcass surveys to document collisions. In addition, we also collected ad hoc collision data year-round and recorded the data using the app iNaturalist. Consistent with previous studies, we found a positive relationship between glass area and collisions. Fitzpatrick, the building with the most window area, caused the most collisions. Schwartz and the Perk, the two small buildings with small window areas, had the lowest collision frequencies. Penn, the only building with bird deterrent pattern, caused just two collisions, despite being almost completely made out of glass. Unlike many research projects, our data collection led to mitigation action. A resolution supported by the student government, including news stories in the local media, resulted in the application of a bird deterrent film to the building with the most collisions: Fitzpatrick. We present our collision data and mitigation result to inspire other researchers and organizations to prevent bird-window collisions.

Population declines in North American birds that migrate to the neotropics.

S Droege,  Pieter Sauer,  Jerrah Robbins … (1989)
Using data from the North American Breeding Bird Survey, we determined that most neotropical migrant bird species that breed in forests of the eastern United States and Canada have recently (1978-1987) declined in abundance after a period of stable or increasing populations. Most permanent residents and temperate-zone migrants did not show a general pattern of decrease during this period. Field data from Mexico were used to classify a subset of the neotropical migrants as using forest or scrub habitats during winter. Population declines during 1978-1987 were significantly greater among the forest-wintering species, while populations of scrub-wintering species increased. The same subset of neotropical migrants also showed overall declines in forest-breeding species, but no significant differences existed between species breeding in forest and scrub habitats. Neotropical migrant species that primarily use forested habitats in either wintering or breeding areas are declining, but a statistically significant association between habitat and population declines was detected only in the tropics.

Bird–building collisions in the United States: Estimates of annual mortality and species vulnerability

Timing of Bird Migration in Relation to Weather: Updated Review