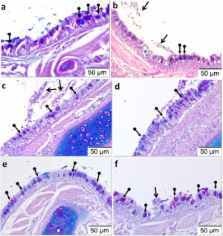 Honey is widely used in folk medicine to treat cough, fever, and inflammation. In this study, the effect of aerosolised honey on airway tissues in a rabbit model of ovalbumin (OVA)-induced asthma was investigated. The ability of honey to act either as a rescuing agent in alleviating asthma-related symptoms or as a preventive agent to preclude the occurrence of asthma was also assessed.

Forty New Zealand white rabbits were sensitized twice with mixture of OVA and aluminium hydroxide on days 1 and 14. Honey treatments were given from day 23 to day 25 at two different doses (25% (v/v) and 50% (v/v) of honey diluted in sterile phosphate buffer saline. In the aerosolised honey as a rescue agent group, animals were euthanized on day 28; for the preventive group, animals were further exposed to aerosolised OVA for 3 days starting from day 28 and euthanized on day 31. The effects of honey on inflammatory cell response, airway inflammation, and goblet cell hyperplasia were assessed for each animal.

Histopathological analyses revealed that aerosolised honey resulted in structural changes of the epithelium, mucosa, and submucosal regions of the airway that caused by the induction with OVA. Treatment with aerosolised honey has reduced the number of airway inflammatory cells present in bronchoalveolar lavage fluid and inhibited the goblet cell hyperplasia.

In this study, aerosolised honey was used to effectively treat and manage asthma in rabbits, and it could prove to be a promising treatment for asthma in humans. Future studies with a larger sample size and studies at the gene expression level are needed to better understand the mechanisms by which aerosolised honey reduces asthma symptoms.

Gregory P. Geba,  Jane Q. Chen,  J. Wang … (1999)
Interleukin (IL)-13 is a pleiotropic cytokine produced in large quantities by activated CD4(+) Th2 lymphocytes. To define further its potential in vivo effector functions, the Clara cell 10-kDa protein promoter was used to express IL-13 selectively in the lung, and the phenotype of the resulting transgenic mice was characterized. In contrast to transgene-negative littermates, the lungs of transgene-positive mice contained an inflammatory response around small and large airways and in the surrounding parenchyma. It was mononuclear in nature and contained significant numbers of eosinophils and enlarged and occasionally multinucleated macrophages. Airway epithelial cell hypertrophy, mucus cell metaplasia, the hyperproduction of neutral and acidic mucus, the deposition of Charcot-Leyden-like crystals, and subepithelial airway fibrosis were also prominently noted. Eotaxin protein and mRNA were also present in large quantities in the lungs of the transgene-positive, but not the transgene-negative, mice. IL-4, IL-5, granulocyte-macrophage colony-stimulating factor, and monocyte chemoattractant protein-5 were not similarly detected. Physiological evaluations revealed significant increases in baseline airways resistance and airways hyperresponsiveness (AHR) to methacholine in transgene-positive animals. Thus, the targeted pulmonary expression of IL-13 causes a mononuclear and eosinophilic inflammatory response, mucus cell metaplasia, the deposition of Charcot-Leyden-like crystals, airway fibrosis, eotaxin production, airways obstruction, and nonspecific AHR. IL-13 may play an important role in the pathogenesis of similar responses in asthma or other Th2-polarized tissue responses.

Eosinophil trafficking in allergy and asthma.

Helene F. Rosenberg,  D. Foster,  Simon Phipps (2007)
Blood eosinophilia and tissue eosinophilia are characteristic features of allergic inflammation and asthma, conditions associated with prominent production of T(H)2 cytokines IL-4, IL-5, and IL-13. In this review, we will consider recent advances in our understanding of the molecular mechanisms that promote expansion and differentiation of eosinophil progenitors in bone marrow, eosinophil recruitment in response to chemokine receptor 3 agonists eosinophil transit mediated by specific ligand-receptor interactions, and prolonged survival of eosinophils in peripheral tissues. Novel rational therapies including antiselectin and antichemokine receptor modalities designed to block eosinophil development and trafficking are discussed, together with the implications of recent clinical studies that have evaluated the efficacy of humanized anti-IL-5 mAb therapy.