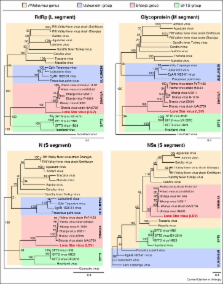 The Bunyavidae family is the largest grouping of RNA viruses and arguably the most diverse. Bunyaviruses have a truly global distribution and can infect vertebrates, invertebrates and plants. The majority of bunyaviruses are vectored by arthropods and thus have the remarkable capability to replicate in hosts of disparate phylogeny. The family has provided many examples of emerging viruses including Sin Nombre and related viruses responsible for hantavirus cardiopulmonary syndrome in the Americas, first identified in 1993, and Schmallenberg virus which emerged in Europe in 2011, causing foetal malformations in ruminants. In addition, some well-known bunyaviruses like Rift Valley fever and Crimean-Congo haemorrhagic fever viruses continue to emerge in new geographical locations. In this short review we focus on newly identified viruses associated with severe haemorrhagic disease in humans in China and the US.

Kenneth Gould,  Edward Holmes,  Elizabeth R Chare (2003)
Recombination is increasingly seen as an important means of shaping genetic diversity in RNA viruses. However, observed recombination frequencies vary widely among those viruses studied to date, with only sporadic occurrences reported in RNA viruses with negative-sense genomes. To determine the extent of homologous recombination in negative-sense RNA viruses, phylogenetic analyses of 79 gene sequence alignments from 35 negative-sense RNA viruses (a total of 2154 sequences) were carried out. Powerful evidence was found for recombination, in the form of incongruent phylogenetic trees between different gene regions, in only five sequences from Hantaan virus, Mumps virus and Newcastle disease virus. This is the first report of recombination in these viruses. More tentative evidence for recombination, where conflicting phylogenetic trees were observed (but were without strong bootstrap support) and/or where putative recombinant regions were very short, was found in three alignments from La Crosse virus and Puumala virus. Finally, patterns of sequence variation compatible with the action of recombination, but not definitive evidence for this process, were observed in a further ten viruses: Canine distemper virus, Crimean-Congo haemorrhagic fever virus, Influenza A virus, Influenza B virus, Influenza C virus, Lassa virus, Pirital virus, Rabies virus, Rift Valley Fever virus and Vesicular stomatitis virus. The possibility of recombination in these viruses should be investigated further. Overall, this study reveals that rates of homologous recombination in negative-sense RNA viruses are very much lower than those of mutation, with many viruses seemingly clonal on current data. Consequently, recombination rate is unlikely to be a trait that is set by natural selection to create advantageous or purge deleterious mutations.

W.-G. Zhang,  Ting-Ting Chen,  Dexin Li … (2012)
The discovery of an emerging viral disease, severe fever with thrombocytopenia syndrome (SFTS), caused by SFTS virus (SFTSV), has prompted the need to understand pathogenesis of SFTSV. We are unique in establishing an infectious model of SFTS in C57/BL6 mice, resulting in hallmark symptoms of thrombocytopenia and leukocytopenia. Viral RNA and histopathological changes were identified in the spleen, liver, and kidney. However, viral replication was only found in the spleen, which suggested the spleen to be the principle target organ of SFTSV. Moreover, the number of macrophages and platelets were largely increased in the spleen, and SFTSV colocalized with platelets in cytoplasm of macrophages in the red pulp of the spleen. In vitro cellular assays further revealed that SFTSV adhered to mouse platelets and facilitated the phagocytosis of platelets by mouse primary macrophages, which in combination with in vivo findings, suggests that SFTSV-induced thrombocytopenia is caused by clearance of circulating virus-bound platelets by splenic macrophages. Thus, this study has elucidated the pathogenic mechanisms of thrombocytopenia in a mouse model resembling human SFTS disease.

DC-SIGN as a receptor for phleboviruses.

Andreas Kühbacher,  Stephen R. Meier,  David Bitto … (2011)
During natural transmission, bunyaviruses are introduced into the skin through arthropod bites, and dermal dendritic cells (DCs) are the first to encounter incoming viruses. DC-SIGN is a C-type lectin highly expressed on the surface of dermal DCs. We found that several arthropod-borne phleboviruses (Bunyaviridae), including Rift Valley fever and Uukuniemi viruses, exploit DC-SIGN to infect DCs and other DC-SIGN-expressing cells. DC-SIGN binds the virus directly via interactions with high-mannose N-glycans on the viral glycoproteins and is required for virus internalization and infection. In live cells, virus-induced clustering of cell surface DC-SIGN could be visualized. An endocytosis-defective mutant of DC-SIGN was unable to mediate virus uptake, indicating that DC-SIGN is an authentic receptor required for both attachment and endocytosis. After internalization, viruses separated from DC-SIGN and underwent trafficking to late endosomes. Our study provides real-time visualization of virus-receptor interactions on the cell surface and establishes DC-SIGN as a phlebovirus entry receptor. Copyright © 2011 Elsevier Inc. All rights reserved.