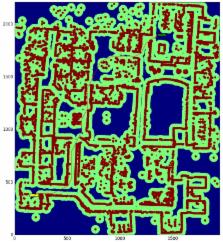 This paper presents an algorithm for finding a solution to the problem of planning a feasible path for a slender autonomous mobile robot in a large and cluttered environment. The presented approach is based on performing a graph search on a kinodynamic-feasible lattice state space of high resolution; however, the technique is applicable to many search algorithms. With the purpose of allowing the algorithm to consider paths that take the robot through narrow passes and close to obstacles, high resolutions are used for the lattice space and the control set. This introduces new challenges because one of the most computationally expensive parts of path search based planning algorithms is calculating the cost of each one of the actions or steps that could potentially be part of the trajectory. The reason for this is that the evaluation of each one of these actions involves convolving the robot’s footprint with a portion of a local map to evaluate the possibility of a collision, an operation that grows exponentially as the resolution is increased. The novel approach presented here reduces the need for these convolutions by using a set of offline precomputed maps that are updated, by means of a partial convolution, as new information arrives from sensors or other sources. Not only does this improve run-time performance, but it also provides support for dynamic search in changing environments. A set of alternative fast convolution methods are also proposed, depending on whether the environment is cluttered with obstacles or not. Finally, we provide both theoretical and experimental results from different experiments and applications.

Emilio Frazzoli,  Sertac Karaman (2011)
During the last decade, sampling-based path planning algorithms, such as Probabilistic RoadMaps (PRM) and Rapidly-exploring Random Trees (RRT), have been shown to work well in practice and possess theoretical guarantees such as probabilistic completeness. However, little effort has been devoted to the formal analysis of the quality of the solution returned by such algorithms, e.g., as a function of the number of samples. The purpose of this paper is to fill this gap, by rigorously analyzing the asymptotic behavior of the cost of the solution returned by stochastic sampling-based algorithms as the number of samples increases. A number of negative results are provided, characterizing existing algorithms, e.g., showing that, under mild technical conditions, the cost of the solution returned by broadly used sampling-based algorithms converges almost surely to a non-optimal value. The main contribution of the paper is the introduction of new algorithms, namely, PRM* and RRT*, which are provably asymptotically optimal, i.e., such that the cost of the returned solution converges almost surely to the optimum. Moreover, it is shown that the computational complexity of the new algorithms is within a constant factor of that of their probabilistically complete (but not asymptotically optimal) counterparts. The analysis in this paper hinges on novel connections between stochastic sampling-based path planning algorithms and the theory of random geometric graphs.

Robert Haralick,  Stanley Sternberg,  Xinhua Zhuang (1987)
For the purposes of object or defect identification required in industrial vision applications, the operations of mathematical morphology are more useful than the convolution operations employed in signal processing because the morphological operators relate directly to shape. The tutorial provided in this paper reviews both binary morphology and gray scale morphology, covering the operations of dilation, erosion, opening, and closing and their relations. Examples are given for each morphological concept and explanations are given for many of their interrelationships.