The interplay of stiffness and force anisotropies drives embryo elongation 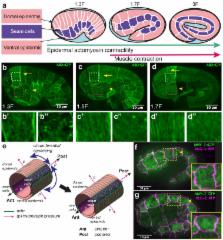 The morphogenesis of tissues, like the deformation of an object, results from the interplay between their material properties and the mechanical forces exerted on them. The importance of mechanical forces in influencing cell behaviour is widely recognized, whereas the importance of tissue material properties, in particular stiffness, has received much less attention. Using Caenorhabditis elegans as a model, we examine how both aspects contribute to embryonic elongation. Measuring the opening shape of the epidermal actin cortex after laser nano-ablation, we assess the spatiotemporal changes of actomyosin-dependent force and stiffness along the antero-posterior and dorso-ventral axis. Experimental data and analytical modelling show that myosin-II-dependent force anisotropy within the lateral epidermis, and stiffness anisotropy within the fiber-reinforced dorso-ventral epidermis are critical in driving embryonic elongation. Together, our results establish a quantitative link between cortical tension, material properties and morphogenesis of an entire embryo.

Animals come in all shapes and size, from ants to elephants. In all cases, the tissues and organs in the animal’s body acquire their shape as the animal develops. Cells in developing tissues squeeze themselves or push and pull on one another, and the resulting forces generate the final shape. This process is called morphogenesis and it is often studied in a worm called Caenorhabditis elegans. This worm’s simplicity makes it easy to work with in the laboratory. Yet processes that occur in C. elegans also take place in other animals, including humans, and so the discoveries made using this worm can have far-reaching implications.

As they develop, the embryos of C. elegans transform from a bean-shaped cluster of cells into the characteristic long shape of a worm, with the head at one end and the tail at the other. The force required to power this elongation is provided by the outer layer of cells of the embryo, known as the epidermis. In these cells, motor-like proteins called myosins pull against a mesh-like scaffold within the cell called the actin cytoskeleton; this pulling is thought to squeeze the embryo all around and cause it to grow longer.

Six strips of cells, running from the head to the tail, make up the epidermis of a C. elegans embryo. Myosin is mostly active in two strips of cells that run along the two sides of the embryo. In the strips above and below these strips (in other words, those on the upper and lower sides of the worm), the myosins are much less active. However, it is not fully understood how this distribution of myosin causes worms to elongate only along the head-to-tail axis.

Vuong-Brender et al. have now mapped the forces exerted in the cells of the worm’s epidermis. The experiments show that, in the strips of cells on the sides of the embryo, myosin’s activity causes the epidermis to constrict around the embryo, akin to a boa constrictor tightening around its prey. At the same time, the actin filaments in the other strips form rigid bundles oriented along the circumference that stiffen the cells in these strips. This prevents the constriction from causing the embryo to inflate at the top and bottom strips. As such, the only direction the embryo can expand is along the axis that runs from its head to its tail.

Together, these findings suggest that a combination of oriented force and stiffness ensure that the embryo only elongates along the head-to-tail axis. The next step is to understand how this orientation and the coordination between cells are controlled at the molecular level.

The genetics of Caenorhabditis elegans.

Daniel S. Brenner,  Daniel Ho (1974)
Methods are described for the isolation, complementation and mapping of mutants of Caenorhabditis elegans, a small free-living nematode worm. About 300 EMS-induced mutants affecting behavior and morphology have been characterized and about one hundred genes have been defined. Mutations in 77 of these alter the movement of the animal. Estimates of the induced mutation frequency of both the visible mutants and X chromosome lethals suggests that, just as in Drosophila, the genetic units in C. elegans are large.

Miguel Manzanares,  Alan R. Horwitz,  Robert Adelstein … (2009)
Non-muscle myosin II (NM II) is an actin-binding protein that has actin cross-linking and contractile properties and is regulated by the phosphorylation of its light and heavy chains. The three mammalian NM II isoforms have both overlapping and unique properties. Owing to its position downstream of convergent signalling pathways, NM II is central in the control of cell adhesion, cell migration and tissue architecture. Recent insight into the role of NM II in these processes has been gained from loss-of-function and mutant approaches, methods that quantitatively measure actin and adhesion dynamics and the discovery of NM II mutations that cause monogenic diseases.

The embryonic cell lineage of the nematode Caenorhabditis elegans.

E Schierenberg,  J E Sulston,  Andrew J. Thomson … (1983)
The embryonic cell lineage of Caenorhabditis elegans has been traced from zygote to newly hatched larva, with the result that the entire cell lineage of this organism is now known. During embryogenesis 671 cells are generated; in the hermaphrodite 113 of these (in the male 111) undergo programmed death and the remainder either differentiate terminally or become postembryonic blast cells. The embryonic lineage is highly invariant, as are the fates of the cells to which it gives rise. In spite of the fixed relationship between cell ancestry and cell fate, the correlation between them lacks much obvious pattern. Thus, although most neurons arise from the embryonic ectoderm, some are produced by the mesoderm and a few are sisters to muscles; again, lineal boundaries do not necessarily coincide with functional boundaries. Nevertheless, cell ablation experiments (as well as previous cell isolation experiments) demonstrate substantial cell autonomy in at least some sections of embryogenesis. We conclude that the cell lineage itself, complex as it is, plays an important role in determining cell fate. We discuss the origin of the repeat units (partial segments) in the body wall, the generation of the various orders of symmetry, the analysis of the lineage in terms of sublineages, and evolutionary implications.