The Genetic Correlation between Height and IQ: Shared Genes or Assortative Mating? 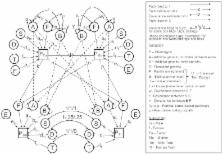 Traits that are attractive to the opposite sex are often positively correlated when scaled such that scores increase with attractiveness, and this correlation typically has a genetic component. Such traits can be genetically correlated due to genes that affect both traits (“pleiotropy”) and/or because assortative mating causes statistical correlations to develop between selected alleles across the traits (“gametic phase disequilibrium”). In this study, we modeled the covariation between monozygotic and dizygotic twins, their siblings, and their parents (total N = 7,905) to elucidate the nature of the correlation between two potentially sexually selected traits in humans: height and IQ. Unlike previous designs used to investigate the nature of the height–IQ correlation, the present design accounts for the effects of assortative mating and provides much less biased estimates of additive genetic, non-additive genetic, and shared environmental influences. Both traits were highly heritable, although there was greater evidence for non-additive genetic effects in males. After accounting for assortative mating, the correlation between height and IQ was found to be almost entirely genetic in nature. Model fits indicate that both pleiotropy and assortative mating contribute significantly and about equally to this genetic correlation.

Traits that are attractive to the opposite sex are often positively correlated when scaled such that scores increase with attractiveness, and this correlation typically has a genetic component. Such traits can be genetically correlated due to genes that affect both traits and/or because assortative mating (people choosing mates who are similar to themselves) causes statistical correlations to develop between selected alleles across the traits. In this study, we used a large (total N = 7,905), genetically informative dataset to understand why two potentially sexually selected traits in humans—height and IQ—are correlated. We found that both shared genes and assortative mating were about equally important in causing the relationship between these two traits. To our knowledge, this is the first study that has been able to disambiguate the two principal reasons—shared genes versus assortative mating—for why traits can be genetically correlated.

Gail Davies,  Albert Tenesa,  Antony Payton … (2011)
General intelligence is an important human quantitative trait that accounts for much of the variation in diverse cognitive abilities. Individual differences in intelligence are strongly associated with many important life outcomes, including educational and occupational attainments, income, health and lifespan 1,2 . Data from twin and family studies are consistent with a high heritability of intelligence 3 , but this inference has been controversial. We conducted a genome-wide analysis of 3511 unrelated adults with data on 549 692 SNPs and detailed phenotypes on cognitive traits. We estimate that 40% of the variation in crystallized-type intelligence and 51% of the variation in fluid-type intelligence between individuals is accounted for by linkage disequilibrium between genotyped common SNP markers and unknown causal variants. These estimates provide lower bounds for the narrow-sense heritability of the traits. We partitioned genetic variation on individual chromosomes and found that, on average, longer chromosomes explain more variation. Finally, using just SNP data we predicted approximately 1% of the variance of crystallized and fluid cognitive phenotypes in an independent sample (P = 0.009 and 0.028, respectively). Our results unequivocally confirm that a substantial proportion of individual differences in human intelligence is due to genetic variation, and are consistent with many genes of small effects underlying the additive genetic influences on intelligence.

Genetic architecture of fitness and nonfitness traits: empirical patterns and development of ideas.

Juha Merilä,  Ben Sheldon (1999)
Comparative studies of the genetic architecture of different types of traits were initially prompted by the expectation that traits under strong directional selection (fitness traits) should have lower levels of genetic variability than those mainly under weak stabilizing selection (nonfitness traits). Hence, early comparative studies revealing lower heritabilities of fitness than nonfitness traits were first framed in terms of giving empirical support for this prediction, but subsequent treatments have effectively reversed this view. Fitness traits seem to have higher levels of additive genetic variance than nonfitness traits - an observation that has been explained in terms of the larger number loci influencing fitness as compared to nonfitness traits. This hypothesis about the larger functional architecture of fitness than nonfitness traits is supported by their higher mutational variability, which is hard to reconcile without evoking capture of mutational variability over many loci. The lower heritabilities of fitness than nonfitness traits, despite the higher additive genetic variance of the former, occur because of their higher residual variances. Recent comparative studies of dominance contributions for different types of traits, together with theoretical predictions and a large body of indirect evidence, suggest an important role of dominance variance in determining levels of residual variance for fitness-traits. The role of epistasis should not be discounted either, since a large number of loci increases the potential for epistatic interactions, and epistasis is strongly implicated in hybrid breakdown.

Model-fitting approaches to the analysis of human behaviour.

Truman Young,  B. Martin,  Daniel Eaves … (1978)
Model-fitting methods are now prominent in the analysis of human behavioural variation. Various ways of specifying models have been proposed. These are identical in their simplest form but differ in the emphasis given to more subtle sources of variation. The biometrical genetical approach allows flexibility in the specification of non-additive factors. Given additivity, the approach of path analysis may be used to specify several environmental models in the presence of assortative mating. In many cases the methods should yield identical conclusions. Several statistical methods have been proposed for parameter estimation and hypothesis testing. The most suitable rely on the method of maximum likelihood for the estimation of variance and covariance components. Any multifactorial model can be formulated in these terms. The choice of method will depend chiefly on the design of the experiment and the ease with which a data summary can be obtained without significant loss of information. Examples are given in which the causes of variation show different degrees of detectable complexity. A variety of experimental designs yield behavioural data which illustrate the contribution of additive and non-additive genetical effects, the mating system, sibling and cultural effects, the interaction of genetical effects with age and sex. The discrimination between alternative hypotheses is often difficult. The extension of the approach to the analysis of multiple measurements and discontinuous traits is considered.

This study was supported by grants from the National Institutes of Health and the National Institute of Mental Health (MH085812 to MCK and DA05131, DA011015, and HD010333 to JKH). The funders had no role in study design, data collection and analysis, decision to publish, or preparation of the manuscript.