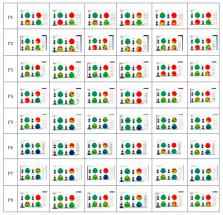 The purpose of this study is to explore the differences in brain activity in various types of throwing games by making encephalographic records. Three conditions of throwing games were compared looking for significant differences (simple throwing, throwing to a goal, and simultaneous throwing with another player). After signal processing, power spectral densities were compared through variance analysis ( p ≤ 0.001). Significant differences were found especially in high-beta oscillations (22–30 Hz). “Goal” and “Simultaneous” throwing conditions show significantly higher values than those shown for throws without opponent. This can be explained by the higher demand for motor control and the higher arousal in competition situations. On the other hand, the high-beta records of the “Goal” condition are significantly higher than those of the “Simultaneous” throwing, which could be understood from the association of the beta waves with decision-making processes. These results support the difference in brain activity during similar games. This has several implications: opening up a path to study the effects of each specific game on brain activity and calling into question the transfer of research findings on animal play to all types of human play.

How to Calculate Sample Size for Different Study Designs in Medical Research?

Motivation, emotion, and their inhibitory control mirrored in brain oscillations.

Denis Knyazev (2006)
Recent studies suggest brain oscillations as a mechanism for cerebral integration. Such integration can exist across a number of functional domains, with different frequency rhythms associated with each domain. Here, evidence is summarized which shows that delta oscillations depend on activity of motivational systems and participate in salience detection. Theta oscillations are involved in memory and emotional regulation. Alpha oscillations participate in inhibitory processes which contribute to a variety of cognitive operations such as attention and memory. The importance of inhibitory functions associated with alpha oscillations increases during the course of evolution. In ontogenesis, these functions develop later and may be more sensitive to a variety of detrimental environmental influences. In a number of developmental stages and pathological conditions, a deficient alpha and/or increased slow-wave activity are associated with cognitive deficits and a lack of inhibitory control. It is shown that slow-wave and alpha oscillations are reciprocally related to each other. This reciprocal relationship may reflect an inhibitory control over motivational and emotional drives which is implemented by the prefrontal cortex.