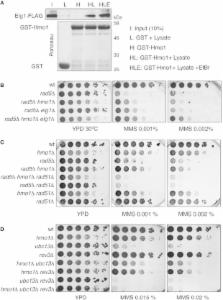 Ludmil Alexandrov,  Serena Nik-Zainal,  David Wedge … (2014)
All cancers are caused by somatic mutations. However, understanding of the biological processes generating these mutations is limited. The catalogue of somatic mutations from a cancer genome bears the signatures of the mutational processes that have been operative. Here, we analysed 4,938,362 mutations from 7,042 cancers and extracted more than 20 distinct mutational signatures. Some are present in many cancer types, notably a signature attributed to the APOBEC family of cytidine deaminases, whereas others are confined to a single class. Certain signatures are associated with age of the patient at cancer diagnosis, known mutagenic exposures or defects in DNA maintenance, but many are of cryptic origin. In addition to these genome-wide mutational signatures, hypermutation localized to small genomic regions, kataegis, is found in many cancer types. The results reveal the diversity of mutational processes underlying the development of cancer with potential implications for understanding of cancer etiology, prevention and therapy.

Stephen J. Elledge,  Lee Zou,  James Mussell (2003)
The function of the ATR (ataxia-telangiectasia mutated- and Rad3-related)-ATRIP (ATR-interacting protein) protein kinase complex is crucial for the cellular response to replication stress and DNA damage. Here, we show that replication protein A (RPA), a protein complex that associates with single-stranded DNA (ssDNA), is required for the recruitment of ATR to sites of DNA damage and for ATR-mediated Chk1 activation in human cells. In vitro, RPA stimulates the binding of ATRIP to ssDNA. The binding of ATRIP to RPA-coated ssDNA enables the ATR-ATRIP complex to associate with DNA and stimulates phosphorylation of the Rad17 protein that is bound to DNA. Furthermore, Ddc2, the budding yeast homolog of ATRIP, is specifically recruited to double-strand DNA breaks in an RPA-dependent manner. A checkpoint-deficient mutant of RPA, rfa1-t11, is defective for recruiting Ddc2 to ssDNA both in vivo and in vitro. Our data suggest that RPA-coated ssDNA is the critical structure at sites of DNA damage that recruits the ATR-ATRIP complex and facilitates its recognition of substrates for phosphorylation and the initiation of checkpoint signaling.