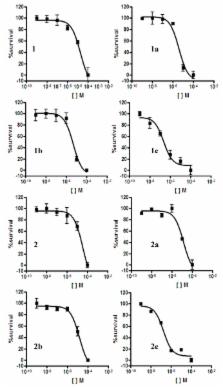 More than 40% of the World population is at risk of contracting malaria, which affects primarily poor populations in tropical and subtropical areas. Antimalarial pharmacotherapy has utilised plant-derived products such as quinine and artemisinin as well as their derivatives. However, worldwide use of these antimalarials has caused the spread of resistant parasites, resulting in increased malaria morbidity and mortality. Considering that the literature has demonstrated the antimalarial potential of triterpenes, specially betulinic acid ( 1) and ursolic acid ( 2), this study investigated the antimalarial activity against P. falciparum chloroquine-sensitive 3D7 strain of some new derivatives of 1 and 2 with modifications at C-3 and C-28. The antiplasmodial study employed flow cytometry and spectrofluorimetric analyses using YOYO-1, dihydroethidium and Fluo4/AM for staining. Among the six analogues obtained, compounds 1c and 2c showed excellent activity (IC 50 = 220 and 175 nM, respectively) while 1a and b demonstrated good activity (IC 50 = 4 and 5 μM, respectively). After cytotoxicity evaluation against HEK293T cells, 1a was not toxic, while 1c and 2c showed IC 50 of 4 μM and a selectivity index (SI) value of 18 and 23, respectively. Moreover, compound 2c, which presents the best antiplasmodial activity, is involved in the calcium-regulated pathway(s).

W Trager,  Jens-Erik B Jensen,  Louise Jensen (1976)
Plasmodium falciparum can now be maintained in continuous culture in human erythrocytes incubated at 38 degrees C in RPMI 1640 medium with human serum under an atmosphere with 7 percent carbon dioxide and low oxygen (1 or 5 percent). The original parasite material, derived from an infected Aotus trivirgatus monkey, was diluted more than 100 million times by the addition of human erythrocytes at 3- or 4-day intervals. The parasites continued to reproduce in their normal asexual cycle of approximately 48 hours but were no longer highly synchronous. The have remained infective to Aotus.

Chris Lambros,  Jerome Vanderberg (1979)
Synchronous development of the erythrocytic stages of a human malaria parasite, Plasmodium falciparum, in culture was accomplished by suspending cultured parasites in 5% D-sorbitol and subsequent reintroduction into culture. Immediately after sorbitol treatment, cultures consisted mainly of single and multiple ring-form infections. At the same time, varying degrees of lysis of erythrocytes infected with the more mature stages of the parasite was evident. Approximately 95% of the parasites were in the ring stage of development at 48 and 96 hr after sorbitol treatment-likewise, a high percentage of trophozoite and schizont stages was observed at 24, 72, and 120 hr. D-Mannitol produced similar, selective, lytic effects.