Erythropoietin and Its Angiogenic Activity 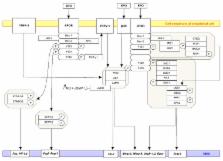 Erythropoietin (EPO) is the main hematopoietic hormone acting on progenitor red blood cells via stimulation of cell growth, differentiation, and anti-apoptosis. However, its receptor (EPOR) is also expressed in various non-hematopoietic tissues, including endothelium. EPO is a pleiotropic growth factor that exhibits growth stimulation and cell/tissue protection on numerous cells and tissues. In this article we review the angiogenesis potential of EPO on endothelial cells in heart, brain, and leg ischemia, as well as its role in retinopathy protection and tumor promotion. Furthermore, the effect of EPO on bone marrow and adipose tissue is also discussed.

Jak-STAT pathways and transcriptional activation in response to IFNs and other extracellular signaling proteins.

Shona Kerr,  I Kerr,  G Stark … (1994)
Through the study of transcriptional activation in response to interferon alpha (IFN-alpha) and interferon gamma (IFN-gamma), a previously unrecognized direct signal transduction pathway to the nucleus has been uncovered: IFN-receptor interaction at the cell surface leads to the activation of kinases of the Jak family that then phosphorylate substrate proteins called STATs (signal transducers and activators of transcription). The phosphorylated STAT proteins move to the nucleus, bind specific DNA elements, and direct transcription. Recognition of the molecules involved in the IFN-alpha and IFN-gamma pathway has led to discoveries that a number of STAT family members exist and that other polypeptide ligands also use the Jak-STAT molecules in signal transduction.