Effect of Chia as Breadmaking Ingredient on Nutritional Quality, Mineral Availability, and Glycemic Index of Bread 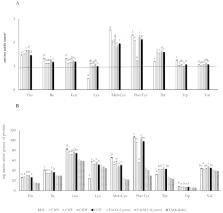 Chia seeds and chia flour could be used as ingredients to enrich foods owing to their high amount of nutrients. The goal of this investigation was to provide further information about how replacing wheat flour with chia ingredients (seeds, whole flour, semi-defatted, and low-fat flours) affects the nutritional and functional value of bread. The higher levels of proteins, lipids and minerals determined in raw chia flours directly affected the increase of these nutrients. High levels of phytates were found in chia ingredients (5.1–6.6 μmol/g d.b.), which affect Zn and Fe bioavailability, as predicted by phytate/mineral molar ratios. Bread with chia had a high amount of linoleic acid, especially in bread with chia seeds, owing to protection of seed integrity during baking. Chia ingredients did not show limiting essential amino acids such as lysine, which is deficient in cereals. Glycemic index was lower in bread with chia ingredients compared to control. The beneficial effects on glucose metabolism together with the nutritional and functional characteristics could be clinically important for prevention of metabolic diseases.

Impact of sourdough on the texture of bread.

Elke Arendt,  Liam A M Ryan,  Fabio Dal Bello (2007)
Sourdough has been used since ancient times and its ability to improve the quality and increase the shelf-life of bread has been widely described. During sourdough fermentation, lactic acid bacteria (LAB) produce a number of metabolites which have been shown to have a positive effect on the texture and staling of bread, e.g. organic acids, exopolysaccharides (EPS) and/or enzymes. EPS produced by LAB have the potential to replace more expensive hydrocolloids used as bread improvers. Organic acids affect the protein and starch fractions of flour. Additionally, the drop in pH associated with acid production causes an increase in the proteases and amylases activity of the flour, thus leading to a reduction in staling. While improving the textural qualities of bread, sourdough fermentation also results in increased mineral bioavailability and reduced phytate content. In this review we will be discussing the effect of sourdough on wheat and rye bread as well as the potential of sourdough to improve the quality of gluten-free bread.

Phytate, calcium, iron, and zinc contents and their molar ratios in foods commonly consumed in China.

Jianhua Piao,  Frans Kok,  Hei-Ying Jin … (2005)
A total of 60 food samples commonly consumed in China were analyzed for phytate using the anion-exchange method and for calcium, iron, and zinc using atomic absorption spectrophotometry. The foods analyzed included those based on cereal grains and soybean. Phytate contents expressed on a wet weight basis ranged from 0 for foods made from starches to 1878 mg/100 g for dried stick-shaped soybean milk film. The calcium contents were between 2.08 mg/100 g for ground corn and 760.67 mg/100 g for diced fried soybean curd. The lowest values of iron and zinc were 0.04 mg/100 g for Panjin pearl rice cooked with discarding extra water and 0.08 mg/100 g for potato and bean starches, while the highest values of iron and zinc were observed in dried stick-shaped soybean milk film. Although many foods were relatively rich in calcium, zinc, and iron, many also contained a higher level of phytate. Of the 60 food samples, 34 foods had a phytate/calcium molar ratio >0.24, 53 foods had a phytate/iron molar ratio >1, 31 foods had a phytate/zinc molar ratio >15, and only 7 foods had a phytate x calcium/zinc >200. Phytate in foods impair the bioavailability of calcium, iron, and zinc, which to some extent depends upon food processing and cooking methods.