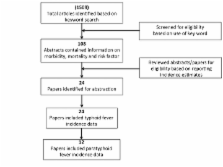 We conducted a systematic literature review of the PubMed and Scopus databases using pre-defined criteria to identify population-based studies with typhoid fever incidence data published between 1980 and 2009. We also abstracted data from annual reports of notifiable diseases in countries with advanced surveillance systems. Typhoid and paratyphoid fever input data were grouped into regions and regional incidence and mortality rates were estimated. Incidence data were extrapolated across regions for those lacking data. Age-specific incidence rates were derived for regions where age-specific data were available. Crude and adjusted estimates of the global typhoid fever burden were calculated.

Typhoid fever remains a significant health burden, especially in low- and middle-income countries. Despite the availability of more recent data on both enteric fevers, additional research is needed in many regions, particularly Africa, Latin America and other developing countries.

A study of typhoid fever in five Asian countries: disease burden and implications for controls.

D Clemens, Do Gia Canh, C. Acosta … (2008)
To inform policy-makers about introduction of preventive interventions against typhoid, including vaccination. A population-based prospective surveillance design was used. Study sites where typhoid was considered a problem by local authorities were established in China, India, Indonesia, Pakistan and Viet Nam. Standardized clinical, laboratory, and surveillance methods were used to investigate cases of fever of >or= 3 days' duration for a one-year period. A total of 441,435 persons were under surveillance, 159,856 of whom were aged 5-15 years. A total of 21,874 episodes of fever were detected. Salmonella typhi was isolated from 475 (2%) blood cultures, 57% (273/475) of which were from 5-15 year-olds. The annual typhoid incidence (per 100,000 person years) among this age group varied from 24.2 and 29.3 in sites in Viet Nam and China, respectively, to 180.3 in the site in Indonesia; and to 412.9 and 493.5 in sites in Pakistan and India, respectively. Altogether, 23% (96/413) of isolates were multidrug resistant (chloramphenicol, ampicillin and trimethoprim-sulfamethoxazole). The incidence of typhoid varied substantially between sites, being high in India and Pakistan, intermediate in Indonesia, and low in China and Viet Nam. These findings highlight the considerable, but geographically heterogeneous, burden of typhoid fever in endemic areas of Asia, and underscore the importance of evidence on disease burden in making policy decisions about interventions to control this disease.

M. K. Bhan, Rajiv Bahl, Shinjini Bhatnagar (2015)
Typhoid fever is estimated to have caused 21.6 million illnesses and 216,500 deaths globally in 2000, affecting all ages. There is also one case of paratyphoid fever for every four of typhoid. The global emergence of multidrug-resistant strains and of strains with reduced susceptibility to fluoroquinolones is of great concern. We discuss the occurrence of poor clinical response to fluoroquinolones despite disc sensitivity. Developments are being made in our understanding of the molecular pathogenesis, and genomic and proteomic studies reveal the possibility of new targets for diagnosis and treatment. Further, we review guidelines for use of diagnostic tests and for selection of antimicrobials in varying clinical situations. The importance of safe water, sanitation, and immunisation in the presence of increasing antibiotic resistance is paramount. Routine immunisation of school-age children with Vi or Ty21a vaccine is recommended for countries endemic for typhoid. Vi vaccine should be used for 2-5 year-old children in highly endemic settings.

Population-Based Incidence of Typhoid Fever in an Urban Informal Settlement and a Rural Area in Kenya: Implications for Typhoid Vaccine Use in Africa

Robert Breiman, Leonard Cosmas, Henry Njuguna … (2012)
Background High rates of typhoid fever in children in urban settings in Asia have led to focus on childhood immunization in Asian cities, but not in Africa, where data, mostly from rural areas, have shown low disease incidence. We set out to compare incidence of typhoid fever in a densely populated urban slum and a rural community in Kenya, hypothesizing higher rates in the urban area, given crowding and suboptimal access to safe water, sanitation and hygiene. Methods During 2007-9, we conducted population-based surveillance in Kibera, an urban informal settlement in Nairobi, and in Lwak, a rural area in western Kenya. Participants had free access to study clinics; field workers visited their homes biweekly to collect information about acute illnesses. In clinic, blood cultures were processed from patients with fever or pneumonia. Crude and adjusted incidence rates were calculated. Results In the urban site, the overall crude incidence of Salmonella enterica serovar Typhi (S. Typhi) bacteremia was 247 cases per 100,000 person-years of observation (pyo) with highest rates in children 5–9 years old (596 per 100,000 pyo) and 2–4 years old (521 per 100,000 pyo). Crude overall incidence in Lwak was 29 cases per 100,000 pyo with low rates in children 2–4 and 5–9 years old (28 and 18 cases per 100,000 pyo, respectively). Adjusted incidence rates were highest in 2–4 year old urban children (2,243 per 100,000 pyo) which were >15-fold higher than rates in the rural site for the same age group. Nearly 75% of S. Typhi isolates were multi-drug resistant. Conclusions This systematic urban slum and rural comparison showed dramatically higher typhoid incidence among urban children <10 years old with rates similar to those from Asian urban slums. The findings have potential policy implications for use of typhoid vaccines in increasingly urban Africa.

This is an open access article distributed under the Creative Commons Attribution License, which permits unrestricted non-commercial use, distribution, and reproduction in any medium, provided the original work is properly cited.