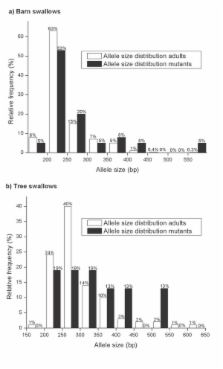 Microsatellites are frequently used genetic markers in a wide range of applications, primarily due to their high length polymorphism levels that can easily be genotyped by fragment length analysis. However, the mode of microsatellite evolution is yet not fully understood, and the role of interrupting motifs for the stability of microsatellites remains to be explored in more detail. Here we present a sequence analysis of mutation events and a description of the structure of repeated regions in the hypervariable, pentanucleotide microsatellite locus HrU10 in barn swallows ( Hirundo rustica) and tree swallows ( Tachycineta bicolor).

In a large-scale parentage analysis in barn swallows and tree swallows, broods were screened for mutations at the HrU10 locus. In 41 cases in the barn swallows and 15 cases in the tree swallows, mutations corresponding to the loss or gain of one or two repeat units were detected. The parent and mutant offspring alleles were sequenced for 33 of these instances (26 in barn swallows and 7 in tree swallows). Replication slippage was considered the most likely mutational process. We tested the hypothesis that HrU10, a microsatellite with a wide allele size range, has an increased probability of introductions of interruptive motifs (IMs) with increasing length of the repeated region. Indeed, the number and length of the IMs was strongly positively correlated with the total length of the microsatellite. However, there was no significant correlation with the length of the longest stretch of perfectly repeated units, indicating a threshold level for the maximum length of perfectly repeated pentanucleotide motifs in stable HrU10 alleles. The combination of sequence and pedigree data revealed that 15 barn swallow mutations (58%) produced alleles that were size homoplasic to other alleles in the data set.

Our results give further insights into the mode of microsatellite evolution, and support the assumption of increased slippage rate with increased microsatellite length and a stabilizing effect of interrupting motifs for microsatellite regions consisting of perfect repeats. In addition, the observed extent of size homoplasy may impose a general caution against using hypervariable microsatellites in genetic diversity measures when alleles are identified by fragment length analysis only.

R Lahue,  P Modrich (1995)
Mismatch repair stabilizes the cellular genome by correcting DNA replication errors and by blocking recombination events between divergent DNA sequences. The reaction responsible for strand-specific correction of mispaired bases has been highly conserved during evolution, and homologs of bacterial MutS and MutL, which play key roles in mismatch recognition and initiation of repair, have been identified in yeast and mammalian cells. Inactivation of genes encoding these activities results in a large increase in spontaneous mutability, and in the case of mice and men, predisposition to tumor development.

THE NUMBER OF ALLELES THAT CAN BE MAINTAINED IN A FINITE POPULATION.