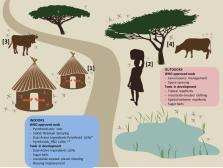 Since the implementation of Roll Back Malaria, the widespread use of insecticide-treated nets (ITNs) and indoor residual spraying (IRS) is thought to have played a major part in the decrease in mortality and morbidity achieved in malaria-endemic regions. In the past decade, resistance to major classes of insecticides recommended for public health has spread across many malaria vector populations. Increasingly, malaria vectors are also showing changes in vector behaviour in response to current indoor chemical vector control interventions. Changes in the time of biting and proportion of indoor biting of major vectors, as well as changes in the species composition of mosquito communities threaten the progress made to control malaria transmission. Outdoor biting mosquito populations contribute to malaria transmission in many parts of sub-Saharan Africa and pose new challenges as they cannot be reliably monitored or controlled using conventional tools. Here, we review existing and novel approaches that may be used to target outdoor communities of malaria vectors. We conclude that scalable tools designed specifically for the control and monitoring of outdoor biting and resting malaria vectors with increasingly complex and dynamic responses to intensifying malaria control interventions are urgently needed. These are crucial for integrated vector management programmes designed to challenge current and future vector populations. 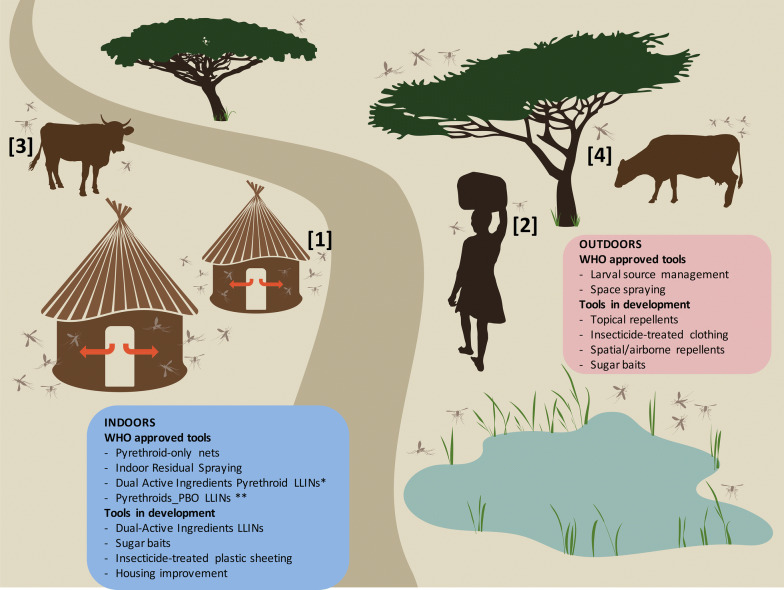 Tanya Russell,  Nicodem Govella,  Salum Azizi … (2011)
Background Insecticide-treated nets (ITNs) and indoor residual spraying (IRS) represent the front-line tools for malaria vector control globally, but are optimally effective where the majority of baseline transmission occurs indoors. In the surveyed area of rural southern Tanzania, bed net use steadily increased over the last decade, reducing malaria transmission intensity by 94%. Methods Starting before bed nets were introduced (1997), and then after two milestones of net use had been reached-75% community-wide use of untreated nets (2004) and then 47% use of ITNs (2009)-hourly biting rates of malaria vectors from the Anopheles gambiae complex and Anopheles funestus group were surveyed. Results In 1997, An. gambiae s.l. and An. funestus mosquitoes exhibited a tendency to bite humans inside houses late at night. For An. gambiae s.l., by 2009, nocturnal activity was less (p = 0.0018). At this time, the sibling species composition of the complex had shifted from predominantly An. gambiae s.s. to predominantly An. arabiensis. For An. funestus, by 2009, nocturnal activity was less (p = 0.0054) as well as the proportion biting indoors (p < 0.0001). At this time, An. funestus s.s. remained the predominant species within this group. As a consequence of these altered feeding patterns, the proportion (mean ± standard error) of human contact with mosquitoes (bites per person per night) occurring indoors dropped from 0.99 ± 0.002 in 1997 to 0.82 ± 0.008 in 2009 for the An. gambiae complex (p = 0.0143) and from 1.00 ± <0.001 to only 0.50 ± 0.048 for the An. funestus complex (p = 0.0004) over the same time period. Conclusions High usage of ITNs can dramatically alter African vector populations so that intense, predominantly indoor transmission is replaced by greatly lowered residual transmission, a greater proportion of which occurs outdoors. Regardless of the underlying mechanism, the residual, self-sustaining transmission will respond poorly to further insecticidal measures within houses. Additional vector control tools which target outdoor biting mosquitoes at the adult or immature stages are required to complement ITNs and IRS.

Frank Takken,  Bart G J Knols (1998)
The African mosquito species Anopheles gambiae sensu lato s.l. and Anopheles funestus rank among the world's most efficient vectors of human malaria. Their unique bionomics, particularly their anthropophilic, endophagic and endophilic characters, guarantee a strong mosquito-host interaction, favorable to malaria transmission. Olfactory cues govern the various behaviors of female mosquitoes and here we review the role of semiochemicals in the life history of African malaria vectors. Recent evidence points towards the existence of human-specific kairomones affecting host-seeking A. gambiae s.l., and efforts are under way to identify the volatiles mediating this behavior. Based on examples from other Culicidae spp., it is argued that there is good reason to assume that mating, sugar feeding, and oviposition behavior in Afrotropical malaria vectors may also be mediated by semiochemicals. It is foreseen that increased knowledge of odor-mediated behaviors will be applied in the development of novel sampling techniques and possibly alternative methods of intervention to control malaria.