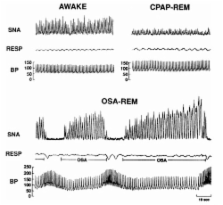 There is emerging evidence linking obstructive sleep apnea (OSA) to vascular disease, including hypertension. This relationship may be independent of co-morbidity, such as obesity. Even apparently healthy OSA patients have evidence of subtle functional vascular abnormalities that are known to occur in patients with hypertension and atherosclerosis. Untreated OSA may possibly contribute to the initiation and/or progression of pathophysiologic mechanisms involved in hypertension, heart failure, cardiac ischemia and stroke. This brief commentary will examine the evidence and mechanisms linking OSA to vascular disease.

Prospective study of the association between sleep-disordered breathing and hypertension.

Non-invasive detection of endothelial dysfunction in children and adults at risk of atherosclerosis.

David Celermajer,  John Deanfield,  D J Spiegelhalter … (1992)
Endothelial dysfunction is an early event in experimental studies of atherogenesis, preceding formation of plaques. We have devised a non-invasive method for testing endothelial function, to find out whether abnormalities are present in symptom-free children and young adults at high risk of atherosclerosis. With high-resolution ultrasound, we measured the diameter of the superficial femoral and brachial arteries at rest, during reactive hyperaemia (with increased flow causing endothelium-dependent dilatation), and after sublingual glyceryl trinitrate (GTN; causing endothelium-independent dilatation) in 100 subjects--50 controls without vascular risk factors (aged 8-57 years), 20 cigarette smokers (aged 17-62 years), 10 children with familial hypercholesterolaemia (FH; aged 8-16 years), and 20 patients with established coronary artery disease (CAD). Adequate scans were obtained in all but 6 cases. Flow-mediated dilatation was observed in arteries from all control subjects. Dilatation was inversely related to baseline vessel diameter (r = -0.81, p < 0.0001); in arteries of 6.0 mm or less, mean dilatation was 10 (SE 2)%. In smokers, FH children, and adults with CAD, flow-mediated dilatation was much reduced or absent (p < 0.001 for comparison with each relevant control group). Dilatation in response to GTN was present in all groups. Endothelial dysfunction is present in children and adults with risk factors for atherosclerosis, such as smoking and hypercholesterolaemia, before anatomical evidence of plaque formation in the arteries studied. This may be an important early event in atherogenesis.

F Nieto,  S Redline,  Harry M Lebowitz … (2000)
Sleep-disordered breathing (SDB) and sleep apnea have been linked to hypertension in previous studies, but most of these studies used surrogate information to define SDB (eg, snoring) and were based on small clinic populations, or both. To assess the association between SDB and hypertension in a large cohort of middle-aged and older persons. Cross-sectional analyses of participants in the Sleep Heart Health Study, a community-based multicenter study conducted between November 1995 and January 1998. A total of 6132 subjects recruited from ongoing population-based studies (aged > or = 40 years; 52.8% female). Apnea-hypopnea index (AHI, the average number of apneas plus hypopneas per hour of sleep, with apnea defined as a cessation of airflow and hypopnea defined as a > or = 30% reduction in airflow or thoracoabdominal excursion both of which are accompanied by a > or = 4% drop in oxyhemoglobin saturation) [corrected], obtained by unattended home polysomnography. Other measures include arousal index; percentage of sleep time below 90% oxygen saturation; history of snoring; and presence of hypertension, defined as resting blood pressure of at least 140/90 mm Hg or use of antihypertensive medication. Mean systolic and diastolic blood pressure and prevalence of hypertension increased significantly with increasing SDB measures, although some of this association was explained by body mass index (BMI). After adjusting for demographics and anthropometric variables (including BMI, neck circumference, and waist-to-hip ratio), as well as for alcohol intake and smoking, the odds ratio for hypertension, comparing the highest category of AHI (> or = 30 per hour) with the lowest category ( or = 12% vs < 0.05%) was 1.46 (95% CI, 1.12-1.88; P for trend <.001). In stratified analyses, associations of hypertension with either measure of SDB were seen in both sexes, older and younger ages, all ethnic groups, and among normal-weight and overweight individuals. Weaker and nonsignificant associations were observed for the arousal index or self-reported history of habitual snoring. Our findings from the largest cross-sectional study to date indicate that SDB is associated with systemic hypertension in middle-aged and older individuals of different sexes and ethnic backgrounds.