Mutation of a common amino acid in NKX2.5 results in dilated cardiomyopathy in two large families 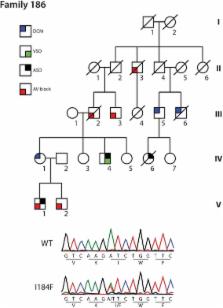 The genetic basis for dilated cardiomyopathy (DCM) can be difficult to determine, particularly in familial cases with complex phenotypes. Next generation sequencing may be useful in the management of such cases.

Each whole exome sequence yielded over 18,000 variants. We identified distinct mutations affecting a common amino acid in NKX2.5. Segregation analysis of the families support the pathogenic role of these variants.

Our study emphasizes the utility of next generation sequencing in identifying causative mutations in complex inherited cardiac disease. We also report a novel pathogenic NKX2.5 mutation.

Kenneth R. Chien,  Matthew Benson,  H. Chen … (2004)
Human mutations in Nkx2-5 lead to progressive cardiomyopathy and conduction defects via unknown mechanisms. To define these pathways, we generated mice with a ventricular-restricted knockout of Nkx2-5, which display no structural defects but have progressive complete heart block, and massive trabecular muscle overgrowth found in some patients with Nkx2-5 mutations. At birth, mutant mice display a hypoplastic atrioventricular (AV) node and then develop selective dropout of these conduction cells. Transcriptional profiling uncovered the aberrant expression of a unique panel of atrial and conduction system-restricted target genes, as well as the ectopic, high level BMP-10 expression in the adult ventricular myocardium. Further, BMP-10 is shown to be necessary and sufficient for a major component of the ventricular muscle defects. Accordingly, loss of ventricular muscle cell lineage specification into trabecular and conduction system myocytes is a new mechanistic pathway for progressive cardiomyopathy and conduction defects in congenital heart disease.

Cardiac septal and valvular dysmorphogenesis in mice heterozygous for mutations in the homeobox gene Nkx2-5.

C Biben,  Alan R. Harvey,  M Feneley … (2000)
Heterozygous mutations in the cardiac homeobox gene, NKX2-5, underlie familial cases of atrial septal defect (ASD) with severe atrioventricular conduction block. In this study, mice heterozygous for Nkx2-5-null alleles were assessed for analogous defects. Although ASD occurred only rarely, atrial septal dysmorphogenesis was evident as increased frequencies of patent foramen ovale and septal aneurysm, and decreased length of the septum primum flap valve. These parameters were compounded by genetic background effects, and in the 129/Sv strain, septal dysmorphogenesis bordered on ASD in 17% of Nkx2-5 heterozygotes. In a proportion of neonatal heterozygotes, as well as in adults with ASD, we found that the size of the foramen ovale was significantly enlarged and altered in shape, potentially exposing the normally thin septum primum to excessive hemodynamic forces. Therefore, defective morphogenesis of the septum secundum may be one contributing factor in the generation of patent foramen ovale, septal aneurysm, and certain ASDs. Mild prolongation of P-R interval in females and an increased frequency of stenotic bicuspid aortic valves were also features of the Nkx2-5 heterozygous phenotype. Our data demonstrate that the complex effects of Nkx2-5 haploinsufficiency in mice are weaker but convergent with those in humans. As in the mouse, the phenotype of human NKX2-5 mutations may be modulated by interacting alleles.

The Maternal Age-Associated Risk of Congenital Heart Disease Is Modifiable

Claire E. Schulkey,  Suk Regmi,  Rachel Magnan … (2015)
Maternal age is a risk factor for congenital heart disease even in the absence of any chromosomal abnormality in the newborn 1-7 . Whether the basis of the risk resides with the mother or oocyte is unknown. The impact of maternal age on congenital heart disease can be modeled in mouse pups that harbor a mutation of the cardiac transcription factor gene Nkx2-5 8 . Here, reciprocal ovarian transplants between young and old mothers establish a maternal basis for the age-associated risk. A high-fat diet does not accelerate the effect of maternal aging, so hyperglycemia and obesity do not simply explain the mechanism. The age-associated risk varies with the mother's strain background, making it a quantitative genetic trait. Most remarkably, voluntary exercise, whether begun by mothers at a young age or later in life, can mitigate the risk when they are older. Thus, even when the offspring carry a causal mutation, an intervention aimed at the mother can meaningfully reduce their risk of congenital heart disease.