Insecticide-Treated Nets for the Prevention of Malaria in Pregnancy: A Systematic Review of Randomised Controlled Trials 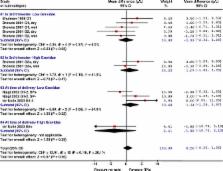 Protection from malaria with insecticide-treated bednets (ITNs) during pregnancy is widely advocated, but evidence of benefit has been inconsistent. We undertook a systematic review of randomised trials.

Three cluster-randomised and two individually randomised trials met the inclusion criteria; four from Africa ( n = 6,418) and one from Thailand ( n = 223). In Africa, ITNs compared to no nets increased mean birth weight by 55 g (95% confidence interval [CI] 21–88), reduced low birth weight by 23% (relative risk [RR] 0.77, 95% CI 0.61–0.98), and reduced miscarriages/stillbirths by 33% (RR 0.67, 0.47–0.97) in the first few pregnancies. Placental parasitaemia was reduced by 23% in all gravidae (RR 0.77, 0.66–0.90). The effects were apparent in the cluster-randomised trials and the one individually randomised trial in Africa. The trial in Thailand, which randomised individuals to ITNs or untreated nets, showed reductions in anaemia and fetal loss in all gravidae, but not reductions in clinical malaria or low birth weight.

ITNs used throughout pregnancy or from mid-pregnancy onwards have a beneficial impact on pregnancy outcome in malaria-endemic Africa in the first few pregnancies. The potential impact of ITNs in pregnant women and their newborns in malaria regions outside Africa requires further research.

A systematic review of the evidence from trials shows that use of insecticide-treated mosquito nets has a beneficial impact on pregnancy outcome in malaria-endemic Africa in the first few pregnancies.

Malaria is one of the world's most important killer diseases. It is responsible for around a million deaths every year, most of them in Africa and most of them in children. Pregnant women and their unborn babies are also at high risk. Women who have malaria become extremely weak because of anemia, they are more likely to miscarry, and their babies have low birth weights. (Birth weights under 2.5 kilograms are considered to be low; low-birth-weight babies face higher risks of sickness and death than other babies.) It has been estimated that, every year, malaria during pregnancy is responsible for the deaths of about 100,000 to 200,000 babies within their first year of life.

The parasite that causes malaria is carried by certain species of mosquito. In the areas where these mosquitoes are found, taking steps to reduce the chance of being bitten can reduce one's chances of getting infected with malaria. In Africa, these mosquitoes bite mainly in the hours of darkness, so sleeping under a mosquito net helps. During the last 20 years it has been established that mosquito nets impregnated with an insecticide provide much better protection than ordinary nets. Research has shown that children who sleep under these insecticide-treated nets (ITNs) are much less likely to get malaria than other children living in the same area. The correct use of ITNs is now being heavily promoted in many national and international programs.

It seems logical that pregnant women should be encouraged to sleep under ITNs, and this is recommended by the World Health Organization and other authorities. However, we cannot be sure that there are benefits, as there is a lack of clear evidence to show whether women who sleep under ITNs actually suffer less from malaria and anemia, and what the implications are for their babies.

They did no new work in the field or in the laboratory. Instead, they conducted what is known as a systematic review. Working to a set of criteria carefully formulated in advance, they searched the medical literature for well-conducted “randomized controlled trials” (RCTs) involving the use of ITNs by pregnant women. RCTs are studies where one group of people receives the “treatment” under investigation and another group does not. It is decided at random who goes into which group. The authors found five trials in Africa, four of which fulfilled the entry criteria for their analysis. In three of the four studies conducted in Africa, whole villages had been “randomized” to determine which pregnant women received ITNs. In another African trial, individual women had been randomized. In total, over 6,000 women were involved in the African trials. One trial had been done outside Africa, in Thailand, where just over 400 individual women had been randomized.

In the research done in Africa, it had been found that women who slept under ITNs had lower numbers of parasites in their blood. Miscarriages were much reduced—by a third in those women who were in their first few pregnancies. The overall proportion of babies who were low birth weight went down by nearly a quarter. In the research done in Thailand, the women using ITNs were less anemic and the miscarriage rate was again lower, although there was no change in the low-birth-weight figures.

The evidence from the three trials done in Africa strongly suggests that it is a good idea for pregnant women to sleep under ITNs. With evidence available from only one trial conducted outside Africa, it is hard to be sure at this stage whether ITNs have the same beneficial effects for pregnant women in other parts of the tropics. More research is needed there.

The following organizations all have useful information about malaria on their Web sites, and we have provided links to the appropriate pages below. Please access these Web sites via the online version of this summary at http://dx.doi.org/10.1371/journal.pmed.0040107.

C Lengeler (2003)
Malaria is an important cause of illness and death in many parts of the world, especially in sub-Saharan Africa. There has been a renewed emphasis on preventive measures at community and individual levels. Insecticide-treated nets (ITNs) are the most prominent malaria preventive measure for large-scale deployment in highly endemic areas. To assess the impact of insecticide-treated bed nets or curtains on mortality, malarial illness (life-threatening and mild), malaria parasitaemia, anaemia, and spleen rates. I searched the Cochrane Infectious Diseases Group trials register (January 2003), CENTRAL (The Cochrane Library, Issue 1, 2003), MEDLINE (1966 to October 2003), EMBASE (1974 to November 2002), LILACS (1982 to January 2003), and reference lists of reviews, books, and trials. I handsearched journals, contacted researchers, funding agencies, and net and insecticide manufacturers. Individual and cluster randomized controlled trials of insecticide-treated bed nets or curtains compared to nets without insecticide or no nets. Trials including only pregnant women were excluded. The reviewer and two independent assessors reviewed trials for inclusion. The reviewer assessed trial methodological quality and extracted and analysed data. Fourteen cluster randomized and eight individually randomized controlled trials met the inclusion criteria. Five trials measured child mortality: ITNs provided 17% protective efficacy (PE) compared to no nets (relative rate 0.83, 95% confidence interval (CI) 0.76 to 0.90), and 23% PE compared to untreated nets (relative rate 0.77, 95% CI 0.63 to 0.95). About 5.5 lives (95% CI 3.39 to 7.67) can be saved each year for every 1000 children protected with ITNs. In areas with stable malaria, ITNs reduced the incidence of uncomplicated malarial episodes in areas of stable malaria by 50% compared to no nets, and 39% compared to untreated nets; and in areas of unstable malaria: by 62% for compared to no nets and 43% compared to untreated nets for Plasmodium falciparum episodes, and by 52% compared to no nets and 11% compared to untreated nets for P. vivax episodes. When compared to no nets and in areas of stable malaria, ITNs also had an impact on severe malaria (45% PE, 95% CI 20 to 63), parasite prevalence (13% PE), high parasitaemia (29% PE), splenomegaly (30% PE), and their use improved the average haemoglobin level in children by 1.7% packed cell volume. ITNs are highly effective in reducing childhood mortality and morbidity from malaria. Widespread access to ITNs is currently being advocated by Roll Back Malaria, but universal deployment will require major financial, technical, and operational inputs.

The burden of malaria in pregnancy in malaria-endemic areas.

R W Steketee,  B Nahlen,  M Parise … (2015)
Pregnant women in malarious areas may experience a variety of adverse consequences from malaria infection including maternal anemia, placental accumulation of parasites, low birth weight (LBW) from prematurity and intrauterine growth retardation (IUGR), fetal parasite exposure and congenital infection, and infant mortality (IM) linked to preterm-LBW and IUGR-LBW. We reviewed studies between 1985 and 2000 and summarized the malaria population attributable risk (PAR) that accounts for both the prevalence of the risk factors in the population and the magnitude of the associated risk for anemia, LBW, and IM. Consequences from anemia and human immunodeficiency virus infection in these studies were also considered. Population attributable risks were substantial: malaria was associated with anemia (PAR range = 3-15%), LBW (8-14%), preterm-LBW (8-36%), IUGR-LBW (13-70%), and IM (3-8%). Human immunodeficiency virus was associated with anemia (PAR range = 12-14%), LBW (11-38%), and direct transmission in 20-40% of newborns, with direct mortality consequences. Maternal anemia was associated with LBW (PAR range = 7-18%), and fetal anemia was associated with increased IM (PAR not available). We estimate that each year 75,000 to 200,000 infant deaths are associated with malaria infection in pregnancy. The failure to apply known effective antimalarial interventions through antenatal programs continues to contribute substantially to infant deaths globally.