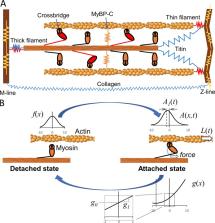 Palmer et al. demonstrate that a stretch-induced enhancement of the myosin crossbridge detachment rate is sufficient to explain the force response of cardiac muscle to a quick stretch and would benefit diastolic function in a beating heart.

The force response of cardiac muscle undergoing a quick stretch is conventionally interpreted to represent stretching of attached myosin crossbridges (phase 1) and detachment of these stretched crossbridges at an exponential rate (phase 2), followed by crossbridges reattaching in increased numbers due to an enhanced activation of the thin filament (phases 3 and 4). We propose that, at least in mammalian cardiac muscle, phase 2 instead represents an enhanced detachment rate of myosin crossbridges due to stretch, phase 3 represents the reattachment of those same crossbridges, and phase 4 is a passive-like viscoelastic response with power-law relaxation. To test this idea, we developed a two-state model of crossbridge attachment and detachment. Unitary force was assigned when a crossbridge was attached, and an elastic force was generated when an attached crossbridge was displaced. Attachment rate, f( x), was spatially distributed with a total magnitude f 0. Detachment rate was modeled as g( x) = g 0 + g 1 x, where g 0 is a constant and g 1 indicates sensitivity to displacement. The analytical solution suggested that the exponential decay rate of phase 2 represents ( f 0 + g 0) and the exponential rise rate of phase 3 represents g 0. The depth of the nadir between phases 2 and 3 is proportional to g 1. We prepared skinned mouse myocardium and applied a 1% stretch under varying concentrations of inorganic phosphate (Pi). The resulting force responses fitted the analytical solution well. The interpretations of phases 2 and 3 were consistent with lower f 0 and higher g 0 with increasing Pi. This novel scheme of interpreting the force response to a quick stretch does not require enhanced thin-filament activation and suggests that the myosin detachment rate is sensitive to stretch. Furthermore, the enhanced detachment rate is likely not due to the typical detachment mechanism following MgATP binding, but rather before MgADP release, and may involve reversal of the myosin power stroke.

Shannon Dunlay,  Véronique L Roger,  Margaret M. Redfield (2017)
Heart failure with preserved ejection fraction (HFpEF) is a clinical syndrome associated with poor quality of life, substantial health-care resource utilization, and premature mortality. Dunlay and colleagues summarize the epidemiological data on HFpEF, with a focus on the prevalence and incidence of HFpEF in the community as well as associated conditions and risk factors, morbidity and mortality after diagnosis, and quality of life.

W. Paulus,  Jean Bronzwaer,  R. D. Kass (2004)
Abnormalities of diastolic function are common to virtually all forms of cardiac failure. However, their underlying mechanisms, precise role in the generation and phenotypic expression of heart failure, and value as specific therapeutic targets remain poorly understood. A growing proportion of heart failure patients, particularly among the elderly, have apparently preserved systolic function, and this is fueling interest for better understanding and treating diastolic abnormalities. Much of the attention in clinical and experimental studies has focused on relaxation and filling abnormalities of the heart, whereas chamber stiffness has been less well studied, particularly in humans. Nonetheless, new insights from basic and clinical research are helping define the regulators of diastolic dysfunction and illuminate novel targets for treatment. This review puts these developments into perspective with the major aim of highlighting current knowledge gaps and controversies.

Michael B Brenner (1988)
The effect of Ca2+ upon the rate constant of force redevelopment following a period of isotonic shortening with immediate restretch to the starting sarcomere length was studied in rabbit psoas fibers at 5 degrees C. Control experiments support the assumption that the rate constant of force redevelopment represents isometric cross-bridge turnover kinetics (fapp + gapp), where fapp and gapp are the rate constants characterizing the transitions from the non-force-generating states to the force-generating states and back to the non-force-generating states, respectively. Parallel measurements of the rate constant of force redevelopment and of force, stiffness, and fiber ATPase during isometric contraction allow the effect of Ca2+ upon fapp and gapp to be determined. Analysis reveals that Ca2+ has a marked effect upon fapp, while gapp remains approximately unchanged. Furthermore, in the range above 25-30% of maximum Ca2+ activation, regulation of force, stiffness, and ATPase is mediated through changes in fapp. Below this range, however, it cannot be ruled out that, in addition, cross-bridges are also switched in and out of the turnover process ("recruitment"). As a consequence of regulation through turnover kinetics, both Ca2+ sensitivity and the slope of force-pCa (-log[Ca2+]) relations are shown to be affected by the ratio fapp/gapp, which may represent an important mechanism of modulation of contractile function in addition to modulation through changes within the regulatory protein system.

This article is distributed under the terms of an Attribution–Noncommercial–Share Alike–No Mirror Sites license for the first six months after the publication date (see http://www.rupress.org/terms/). After six months it is available under a Creative Commons License (Attribution–Noncommercial–Share Alike 4.0 International license, as described at https://creativecommons.org/licenses/by-nc-sa/4.0/).