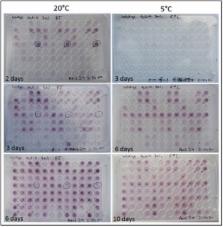 Significant progress is being made in the development of the next generation of low cost life detection instrumentation with much smaller size, mass and energy requirements. Here, we describe in situ life detection and sequencing in the field in soils over laying ice wedges in polygonal permafrost terrain on Axel Heiberg Island, located in the Canadian high Arctic (79°26′N), an analog to the polygonal permafrost terrain observed on Mars. The life detection methods used here include (1) the cryo-iPlate for culturing microorganisms using diffusion of in situ nutrients into semi-solid media (2) a Microbial Activity Microassay (MAM) plate (BIOLOG Ecoplate) for detecting viable extant microorganisms through a colourimetric assay, and (3) the Oxford Nanopore MinION for nucleic acid detection and sequencing of environmental samples and the products of MAM plate and cryo-iPlate. We obtained 39 microbial isolates using the cryo-iPlate, which included several putatively novel strains based on the 16S rRNA gene, including a Pedobacter sp. (96% closest similarity in GenBank) which we partially genome sequenced using the MinION. The MAM plate successfully identified an active community capable of L-serine metabolism, which was used for metagenomic sequencing with the MinION to identify the active and enriched community. A metagenome on environmental ice wedge soil samples was completed, with base calling and uplink/downlink carried out via satellite internet. Validation of MinION sequencing using the Illumina MiSeq platform was consistent with the results obtained with the MinION. The instrumentation and technology utilized here is pre-existing, low cost, low mass, low volume, and offers the prospect of equipping micro-rovers and micro-penetrators with aggressive astrobiological capabilities. Since potentially habitable astrobiology targets have been identified (RSLs on Mars, near subsurface water ice on Mars, the plumes and oceans of Europa and Enceladus), future astrobiology missions will certainly target these areas and there is a need for direct life detection instrumentation.

J P Grotzinger, D Y Sumner, L. Kah … (2014)
The Curiosity rover discovered fine-grained sedimentary rocks, which are inferred to represent an ancient lake and preserve evidence of an environment that would have been suited to support a martian biosphere founded on chemolithoautotrophy. This aqueous environment was characterized by neutral pH, low salinity, and variable redox states of both iron and sulfur species. Carbon, hydrogen, oxygen, sulfur, nitrogen, and phosphorus were measured directly as key biogenic elements; by inference, phosphorus is assumed to have been available. The environment probably had a minimum duration of hundreds to tens of thousands of years. These results highlight the biological viability of fluvial-lacustrine environments in the post-Noachian history of Mars.

J. Hunter Waite, Michael Combi, Wing-Huen Ip … (2006)
The Cassini spacecraft passed within 168.2 kilometers of the surface above the southern hemisphere at 19:55:22 universal time coordinated on 14 July 2005 during its closest approach to Enceladus. Before and after this time, a substantial atmospheric plume and coma were observed, detectable in the Ion and Neutral Mass Spectrometer (INMS) data set out to a distance of over 4000 kilometers from Enceladus. INMS data indicate that the atmospheric plume and coma are dominated by water, with significant amounts of carbon dioxide, an unidentified species with a mass-to-charge ratio of 28 daltons (either carbon monoxide or molecular nitrogen), and methane. Trace quantities (<1%) of acetylene and propane also appear to be present. Ammonia is present at a level that does not exceed 0.5%. The radial and angular distributions of the gas density near the closest approach, as well as other independent evidence, suggest a significant contribution to the plume from a source centered near the south polar cap, as distinct from a separately measured more uniform and possibly global source observed on the outbound leg of the flyby.

One chromosome, one contig: complete microbial genomes from long-read sequencing and assembly.

Sergey Koren, Adam Phillippy (2015)
Like a jigsaw puzzle with large pieces, a genome sequenced with long reads is easier to assemble. However, recent sequencing technologies have favored lowering per-base cost at the expense of read length. This has dramatically reduced sequencing cost, but resulted in fragmented assemblies, which negatively affect downstream analyses and hinder the creation of finished (gapless, high-quality) genomes. In contrast, emerging long-read sequencing technologies can now produce reads tens of kilobases in length, enabling the automated finishing of microbial genomes for under $1000. This promises to improve the quality of reference databases and facilitate new studies of chromosomal structure and variation. We present an overview of these new technologies and the methods used to assemble long reads into complete genomes. Copyright © 2014 The Authors. Published by Elsevier Ltd.. All rights reserved.

This article was submitted to Extreme Microbiology, a section of the journal Frontiers in Microbiology