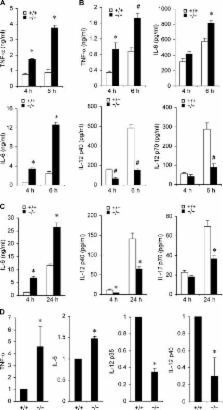 MAP kinases in the immune response.

Tessa Davis,  Chen Dong,  Wendy Flavell (2001)
MAP kinases are among the most ancient signal transduction pathways and are widely used throughout evolution in many physiological processes. In mammalian species, MAP kinases are involved in all aspects of immune responses, from the initiation phase of innate immunity, to activation of adaptive immunity, and to cell death when immune function is complete. In this review, we summarize recent progress in understanding the function and regulation of MAP kinase pathways in these phases of immune responses.

Debra Murphy,  Jennifer L. Hsieh,  T. C. Hsieh … (1993)
Development of the appropriate CD4+ T helper (TH) subset during an immune response is important for disease resolution. With the use of naïve, ovalbumin-specific alpha beta T cell receptor transgenic T cell, it was found that heat-killed Listeria monocytogenes induced TH1 development in vitro through macrophage production of interleukin-12 (IL-12). Moreover, inhibition of macrophage production of IL-12 may explain the ability of IL-10 to suppress TH1 development. Murine immune responses to L. monocytogenes in vivo are of the appropriate TH1 phenotype. Therefore, this regulatory pathway may have evolved to enable innate immune cells, through interactions with microbial pathogens, to direct development of specific immunity toward the appropriate TH phenotype.

M. R. Amezaga,  N D'Andrea,  M. Kubin … (1993)
Natural killer cell stimulatory factor or interleukin 12 (NKSF/IL-12) is a heterodimeric cytokine produced by monocytes/macrophages, B cells, and possibly other accessory cell types primarily in response to bacteria or bacterial products. NKSF/IL-12 mediates pleiomorphic biological activity on T and NK cells and, alone or in synergy with other inducers, is a powerful stimulator of interferon gamma (IFN- gamma) production. IL-10 is a potent inhibitor of monocyte-macrophage activation, that inhibits production of tumor necrosis factor alpha (TNF-alpha), IL-1 and also IFN-gamma from lymphocytes acting at the level of accessory cells. Because TNF-alpha and IL-1 are not efficient inducers of IFN-gamma, the mechanism by which IL-10 inhibits IFN-gamma production is not clear. In this paper, we show that IL-10 is a potent inhibitor of NKSF/IL-12 production from human peripheral blood mononuclear cells activated with Staphylococcus aureus or lipopolysaccharide (LPS). Both the production of the free NKSF/IL-12 p40 chain and the biologically active p70 heterodimer are blocked by IL- 10. NKSF/IL-12 p40 chain mRNA accumulation is strongly induced by S. aureus or LPS and downregulated by IL-10, whereas the p35 mRNA is constitutively expressed and only minimally regulated by S. aureus, LPS, or IL-10. Although IL-10 is able to block the production of NKSF/IL-12, a powerful inducer of IFN-gamma both in vitro and in vivo, the mechanism of inhibition of IFN-gamma by IL-10 cannot be explained only on the basis of inhibition of NKSF/IL-12 because IL-10 can partially inhibit IFN-gamma production induced by NKSF/IL-12, and also, the IFN-gamma production in response to various stimuli in the presence of neutralizing antibodies to NKSF/IL-12. Our findings that antibodies against NKSF/IL-12, TNF-alpha, or IL-1 beta can significantly inhibit IFN-gamma production in response to various stimuli and that NKSF/IL-12 and IL-1 beta can overcome the IL-10-mediated inhibition of IFN-gamma, suggest that IL-10 inhibition of IFN-gamma production is primarily due to its blocking production from accessory cells of the IFN-gamma- inducer NKSF/IL-12, as well as the costimulating molecule IL-1 beta.