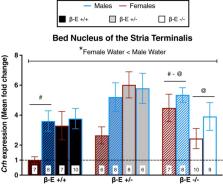 Binge drinking is an increasingly common pattern of risky use associated with numerous health problems, including alcohol use disorders. Because low basal plasma levels of β‐endorphin (β‐E) and an increased β‐E response to alcohol are evident in genetically at‐risk human populations, this peptide is thought to contribute to the susceptibility for disordered drinking. Animal models suggest that the effect of β‐E on consumption may be sex‐dependent. Here, we studied binge‐like EtOH consumption in transgenic mice possessing varying levels of β‐E: wild‐type controls with 100% of the peptide (β‐E +/+), heterozygous mice constitutively modified to possess 50% of wild‐type levels (β‐E +/−) and mice entirely lacking the capacity to synthesize β‐E (−/−). These three genotypes and both sexes were evaluated in a 4‐day, two‐bottle choice, drinking in the dark paradigm with limited access to 20% EtOH. β‐E deficiency determined sexually divergent patterns of drinking in that β‐E −/− female mice drank more than their wild‐type counterparts, an effect not observed in male mice. β‐E −/− female mice also displayed elevated basal anxiety, plasma corticosterone and corticotropin‐releasing hormone mRNA in the extended amygdala, and all of these were normalized by EtOH self‐administration. These data suggest that a heightened risk for excessive EtOH consumption in female mice is related to the drug's ability to ameliorate an overactive anxiety/stress‐like state. Taken together, our study highlights a critical impact of sex on neuropeptide regulation of EtOH consumption.

The central amygdala as an integrative hub for anxiety and alcohol use disorders.

Nicholas Gilpin,  Melissa Herman,  Marisa Roberto (2015)
The central amygdala (CeA) plays a central role in physiologic and behavioral responses to fearful stimuli, stressful stimuli, and drug-related stimuli. The CeA receives dense inputs from cortical regions, is the major output region of the amygdala, is primarily GABAergic (inhibitory), and expresses high levels of prostress and antistress peptides. The CeA is also a constituent region of a conceptual macrostructure called the extended amygdala that is recruited during the transition to alcohol dependence. We discuss neurotransmission in the CeA as a potential integrative hub between anxiety disorders and alcohol use disorder, which are commonly co-occurring in humans. Imaging studies in humans and multidisciplinary work in animals collectively suggest that CeA structure and function are altered in individuals with anxiety disorders and alcohol use disorder, the end result of which may be disinhibition of downstream "effector" regions that regulate anxiety-related and alcohol-related behaviors.

Addiction is a Reward Deficit and Stress Surfeit Disorder

George F Koob (2013)
Drug addiction can be defined by a three-stage cycle – binge/intoxication, withdrawal/negative affect, and preoccupation/anticipation – that involves allostatic changes in the brain reward and stress systems. Two primary sources of reinforcement, positive and negative reinforcement, have been hypothesized to play a role in this allostatic process. The negative emotional state that drives negative reinforcement is hypothesized to derive from dysregulation of key neurochemical elements involved in the brain reward and stress systems. Specific neurochemical elements in these structures include not only decreases in reward system function (within-system opponent processes) but also recruitment of the brain stress systems mediated by corticotropin-releasing factor (CRF) and dynorphin-κ opioid systems in the ventral striatum, extended amygdala, and frontal cortex (both between-system opponent processes). CRF antagonists block anxiety-like responses associated with withdrawal, block increases in reward thresholds produced by withdrawal from drugs of abuse, and block compulsive-like drug taking during extended access. Excessive drug taking also engages the activation of CRF in the medial prefrontal cortex, paralleled by deficits in executive function that may facilitate the transition to compulsive-like responding. Neuropeptide Y, a powerful anti-stress neurotransmitter, has a profile of action on compulsive-like responding for ethanol similar to a CRF1 antagonist. Blockade of the κ opioid system can also block dysphoric-like effects associated with withdrawal from drugs of abuse and block the development of compulsive-like responding during extended access to drugs of abuse, suggesting another powerful brain stress system that contributes to compulsive drug seeking. The loss of reward function and recruitment of brain systems provide a powerful neurochemical basis that drives the compulsivity of addiction.

Dennis C Choi (corresponding) ,  Amy R Furay,  Nathan Evanson … (2007)
Limbic and cortical neurocircuits profoundly influence hypothalamic-pituitary-adrenal (HPA) axis responses to stress yet have little or no direct projections to the hypothalamic paraventricular nucleus (PVN). Numerous lines of evidence suggest that the bed nucleus of the stria terminalis (BST) is well positioned to relay limbic information to the PVN. The BST comprises multiple anatomically distinct nuclei, of which some are known to receive direct limbic and/or cortical input and to heavily innervate the PVN. Our studies test the hypothesis that subregions of the BST differentially regulate HPA axis responses to acute stress. Male Sprague Dawley rats received bilateral ibotenate lesions, targeting either the principal nucleus in the posterior BST or the dorsomedial/fusiform nuclei in the anteroventral BST. Posterior BST lesions elevated plasma ACTH and corticosterone in response to acute restraint stress, increased stress-induced PVN c-fos mRNA, and elevated PVN corticotropin-releasing hormone (CRH) and parvocellular arginine vasopressin (AVP) mRNA expression relative to sham-lesion animals. In contrast, anterior BST lesions attenuated the plasma corticosterone response and decreased c-fos mRNA induction in the PVN but did not affect CRH and parvocellular AVP mRNA expression in the PVN. These data suggest that posterior BST nuclei are involved in inhibition of the HPA axis, whereas the anteroventral BST nuclei are involved in HPA axis excitation. The results indicate that the BST contains functional subdomains that play different roles in integrating and processing limbic information in response to stress and further suggest that excitatory as well as inhibitory limbic information is funneled through these important cell groups.