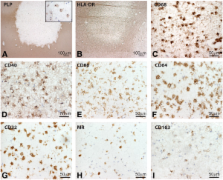 Macrophages play a dual role in multiple sclerosis (MS) pathology. They can exert neuroprotective and growth promoting effects but also contribute to tissue damage by production of inflammatory mediators. The effector function of macrophages is determined by the way they are activated. Stimulation of monocyte-derived macrophages in vitro with interferon-γ and lipopolysaccharide results in classically activated (CA/M1) macrophages, and activation with interleukin 4 induces alternatively activated (AA/M2) macrophages.

Our data show that M1 markers, including CD40, CD86, CD64 and CD32 were abundantly expressed by microglia in normal appearing white matter and by activated microglia and macrophages throughout active demyelinating MS lesions. M2 markers, such as MR and CD163 were expressed by myelin-laden macrophages in active lesions and perivascular macrophages. Double staining with anti-CD40 and anti-MR revealed that approximately 70% of the CD40-positive macrophages in MS lesions also expressed MR, indicating that the majority of infiltrating macrophages and activated microglial cells display an intermediate activation status.

Our findings show that, although macrophages in active MS lesions predominantly display M1 characteristics, a major subset of macrophages have an intermediate activation status.

Macrophage activation switching: an asset for the resolution of inflammation.

D Dormont,  N Dereuddre-Bosquet,  B Samah … (2005)
Macrophages play a central role in inflammation and host defence against microorganisms, but they also participate actively in the resolution of inflammation after alternative activation. However, it is not known whether the resolution of inflammation requires alternative activation of new resting monocytes/macrophages or if proinflammatory activated macrophages have the capacity to switch their activation towards anti-inflammation. In order to answer this question, we first characterized differential human macrophage activation phenotypes. We found that CD163 and CD206 exhibited mutually exclusive induction patterns after stimulation by a panel of anti-inflammatory molecules, whereas CCL18 showed a third, overlapping, pattern. Hence, alternative activation is not a single process, but provides a variety of different cell populations. The capacity of macrophages to switch from one activation state to another was then assessed by determining the reversibility of CD163 and CD206 expression and of CCL18 and CCL3 production. We found that every activation state was rapidly and fully reversible, suggesting that a given cell may participate sequentially in both the induction and the resolution of inflammation. These findings may provide new insight into the inflammatory process as well as new fields of investigation for immunotherapy in the fields of chronic inflammatory diseases and cancer.

The mononuclear phagocyte system: a new classification of macrophages, monocytes, and their precursor cells.

R. Van Der Leeuw,  Logan Spector,  Z Cohn … (1971)
There have been many attempts in the past to classify phagocytic mononuclear cells and to define the cell system they are considered to form-among these being the "macrophage system" of Metchnikoff, the "reticulo-endothelial system" of Aschoff, and the "reticulo-histiocyte system" proposed by Volterra and reintroduced by Thomas. None of these is entirely adequate in the light of present knowledge. In 1969, therefore, a group of workers proposed a new classification of all highly phagocytic mononuclear cells and their precursors in what they termed the "mononuclear phagocyte system". This system includes the promonocytes and their precursors in the bone marrow, the monocytes in the peripheral blood, and the macrophages in the tissues. Subsequent consultation with numerous other specialists throughout the world led to a certain number of changes in this classification, which is now proposed in revised form.Inclusion of cells in the "mononuclear phagocyte system" is based on similarities in the morphology, function, origin, and kinetics of the phagocytes. By these criteria reticular cells, dendritic cells, endothelial cells, and fibroblasts (fibrocytes) are excluded. The proponents point out that as new knowledge is acquired modifications may have to be made, certain cells being added to or removed from the new classification.