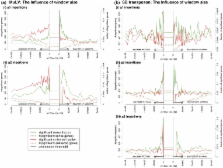 Insertional mutagenesis is a potent forward genetic screening technique used to identify candidate cancer genes in mouse model systems. An important, yet unresolved issue in the analysis of these screens, is the identification of the genes affected by the insertions. To address this, we developed Kernel Convolved Rule Based Mapping (KC-RBM). KC-RBM exploits distance, orientation and insertion density across tumors to automatically map integration sites to target genes. We perform the first genome-wide evaluation of the association of insertion occurrences with aberrant gene expression of the predicted targets in both retroviral and transposon data sets. We demonstrate the efficiency of KC-RBM by showing its superior performance over existing approaches in recovering true positives from a list of independently, manually curated cancer genes. The results of this work will significantly enhance the accuracy and speed of cancer gene discovery in forward genetic screens. KC-RBM is available as R-package.

Transcription start regions in the human genome are favored targets for MLV integration.

Yuan-Yuan Li,  Bruce Crise,  Xiaolin Wu … (2003)
Factors contributing to retroviral integration have been intractable because past studies have not precisely located genomic sites of proviruses in sufficient numbers for significant analysis. In this study, 903 murine leukemia virus (MLV) and 379 human immunodeficiency virus-1 (HIV-1) integrations in the human genome were mapped. The data showed that MLV preferred integration near the start of transcriptional units (either upstream or downstream) whereas HIV-1 preferred integration anywhere in the transcriptional unit but not upstream of the transcriptional start. Defining different integration site preferences for retroviruses will have important ramifications for gene therapy and may aid in our understanding of the factors directing the integration process.

Leonardo Salmena,  Arkaitz Carracedo,  Pier Paolo Pandolfi (2008)
Since its discovery as the elusive tumor suppressor gene at the frequently mutated 10q23 locus, PTEN has been identified as lost or mutated in several sporadic and heritable tumor types. A decade of work has established that PTEN is a nonredundant phosphatase that is essential for regulating the highly oncogenic prosurvival PI3K/AKT signaling pathway. This review discusses emerging modes of PTEN function and regulation, and speculates about how manipulation of PTEN function could be used for cancer therapy.