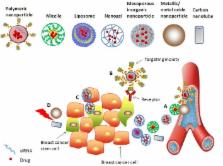 Accumulating evidences have suggested the existence of breast cancer stem cells (BCSCs), which possess the potential of both self-renewal and differentiation. The origin of BCSCs might have relationship to the development of normal mammary stem cells. BCSCs are believed to play a key role in the initiation, recurrence and chemo-/radiotherapy resistances of breast cancer. Therefore, elimination of BCSCs is crucial for breast cancer therapy. However, conventional chemo and radiation therapies cannot eradicate BCSCs effectively. Fortunately, nanotechnology holds great potential for specific and efficient anti-BCSCs treatment. “Smart” nanocarriers can distinguish BCSCs from the other breast cancer cells and selectively deliver therapeutic agents to the BCSCs. Emerging findings suggest that BCSCs in breast cancer could be successfully inhibited and even eradicated by functionalized nanomedicines. In this review, we focus on origin of BCSCs, strategies used to target BCSCs, and summarize the nanotechnology-based delivery systems that have been applied for eliminating BCSCs in breast cancer.

Adalberto Benito,  Nigel Clarke,  Max Wicha … (2003)
Breast cancer is the most common malignancy in United States women, accounting for >40,000 deaths each year. These breast tumors are comprised of phenotypically diverse populations of breast cancer cells. Using a model in which human breast cancer cells were grown in immunocompromised mice, we found that only a minority of breast cancer cells had the ability to form new tumors. We were able to distinguish the tumorigenic (tumor initiating) from the nontumorigenic cancer cells based on cell surface marker expression. We prospectively identified and isolated the tumorigenic cells as CD44(+)CD24(-/low)Lineage(-) in eight of nine patients. As few as 100 cells with this phenotype were able to form tumors in mice, whereas tens of thousands of cells with alternate phenotypes failed to form tumors. The tumorigenic subpopulation could be serially passaged: each time cells within this population generated new tumors containing additional CD44(+)CD24(-/low)Lineage(-) tumorigenic cells as well as the phenotypically diverse mixed populations of nontumorigenic cells present in the initial tumor. The ability to prospectively identify tumorigenic cancer cells will facilitate the elucidation of pathways that regulate their growth and survival. Furthermore, because these cells drive tumor development, strategies designed to target this population may lead to more effective therapies.

ALDH1 is a marker of normal and malignant human mammary stem cells and a predictor of poor clinical outcome.

Andrew M Brown,  Florence Monville,  Richard D. Hayes … (2007)
Application of stem cell biology to breast cancer research has been limited by the lack of simple methods for identification and isolation of normal and malignant stem cells. Utilizing in vitro and in vivo experimental systems, we show that normal and cancer human mammary epithelial cells with increased aldehyde dehydrogenase activity (ALDH) have stem/progenitor properties. These cells contain the subpopulation of normal breast epithelium with the broadest lineage differentiation potential and greatest growth capacity in a xenotransplant model. In breast carcinomas, high ALDH activity identifies the tumorigenic cell fraction, capable of self-renewal and of generating tumors that recapitulate the heterogeneity of the parental tumor. In a series of 577 breast carcinomas, expression of ALDH1 detected by immunostaining correlated with poor prognosis. These findings offer an important new tool for the study of normal and malignant breast stem cells and facilitate the clinical application of stem cell concepts.

This article was submitted to Pharmacology of Anti-Cancer Drugs, a section of the journal Frontiers in Pharmacology