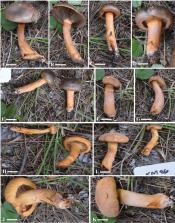 With only three published reports, the genus Chroogomphus ( Boletales , Gomphidiaceae ) is poorly studied in Pakistan. During recent sampling events in Khyber Pakhtunkhawa province, Pakistan, several collections of Chroogomphus were made, representing undescribed taxa. Based on morphological and molecular data, two new species are described: Chroogomphus pakistanicus and C. pruinosus . We present a description and illustrations for both taxa. A molecular phylogenetic reconstruction, based on the internal transcribed spacer (ITS1–5.8S–ITS2) barcode region, shows that C. pakistanicus and C. pruinosus are placed in two different subgenera of Chroogomphus ( subg. Chroogomphus and subg. Siccigomphus , respectively).

Garima Singh,  Francesco Dal Grande,  Pradeep Divakar … (2015)
Species recognition in lichen-forming fungi has been a challenge because of unsettled species concepts, few taxonomically relevant traits, and limitations of traditionally used morphological and chemical characters for identifying closely related species. Here we analyze species diversity in the cosmopolitan genus Protoparmelia s.l. The ~25 described species in this group occur across diverse habitats from the boreal -arctic/alpine to the tropics, but their relationship to each other remains unexplored. In this study, we inferred the phylogeny of 18 species currently assigned to this genus based on 160 specimens and six markers: mtSSU, nuLSU, ITS, RPB1, MCM7, and TSR1. We assessed the circumscription of species-level lineages in Protoparmelia s. str. using two coalescent-based species delimitation methods – BP&P and spedeSTEM. Our results suggest the presence of a tropical and an extra-tropical lineage, and eleven previously unrecognized distinct species-level lineages in Protoparmelia s. str. Several cryptic lineages were discovered as compared to phenotype-based species delimitation. Many of the putative species are supported by geographic evidence.

Studies on Ectomycorrhizae XXIV. Ectomycorrhizae of Chroogomphus helveticus and C. rutilus (Gomphidiaceae, Basidiomycetes) and their relationship to those of Suillus and Rhizopogon