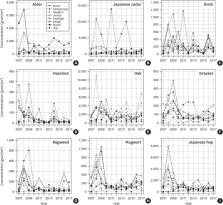 A pollen calendar was produced in Korea using data from recent observations, and a new method for creating the calendar was proposed, considering both risk levels and temporal resolution of pollen concentrations. A probability distribution was used for smoothing concentrations and determining risk levels. Airborne pollen grains were collected between 2007 and 2017 at 8 stations; 13 allergenic pollens, including those of alder, Japanese cedar, birch, hazelnut, oak, elm, pine, ginkgo, chestnut, grasses, ragweed, mugwort and Japanese hop, were identified from the collected grains.

A new methodology for the creation of a pollen calendar was developed to attenuate the impact of large temporal and spatial variability in pollen concentrations. This revised calendar should be available to the public and allergic patients to prevent aggravation of pollen allergy.

The Revised Edition of Korean Calendar for Allergenic Pollens

Jae-Won Oh,  Ha-Baik Lee,  Im-Joo Kang … (2011)
The old calendar of pollens did not reflect current pollen distribution and concentrations that can be influenced by changes of weather and environment of each region in South Korea. A new pollen calendar of allergenic pollens was made based on the data on pollen concentrations obtained in eight regions nationwide between 1997 and 2009. The distribution of pollen was assessed every day at 8 areas (Seoul, Guri, Busan, Daegu, Jeonju, Kwangju, Kangneung, and Jeju) for 12 years between July 1, 1997 and June 30, 2009. Pollens were collected by using Burkard 7-day sampler (Burkard Manufacturing Co Ltd, UK). Pollens which were stained with Calberla's fuchsin staining solution were identified and counted. Pine became the highest pollen in May, and the pollen concentrations of oak and birch also became high. Ragweed appeared in the middle of August and showed the highest pollen concentration in the middles of September. Japanese hop showed a high concentration between the middle of August and the end of September, and mugwort appeared in the middles of August and its concentration increased up until early September. In Kangneung, birch appeared earlier, pine showed a higher pollen concentration than in the other areas. In Daegu, Oriental thuja and alder produced a large concentration of pollens. Pine produced a large concentration of pollens between the middle of April and the end of May. Weeds showed higher concentrations in September and mugwort appeared earlier than ragweed. In Busan the time of flowering is relatively early, and alder and Oriental thuja appeared earliest among all areas. In Kwangju, Oriental thuja and hazelnut appeared in early February. Japanese cedar showed the highest pollen concentration in March in Jeju. In conclusion, update information on pollen calendar in South Korea should be provided for allergic patients through the website to manage and prevent the pollinosis.

Thomas A E Platts-Mills,  S M Pollart,  G Fiocco … (1989)
In recent years the morbidity and mortality of asthma has increased, although the etiology is still poorly understood. Most patients with asthma suffer acute attacks that are commonly treated in hospital emergency rooms (ER). In the present study, asthma in adults was studied with acute attacks as a marker for the disease; 102 patients first observed at a university hospital ER with acute airway obstruction were compared to 118 patients observed at the same ER with any diagnosis other than shortness of breath to evaluate allergy as a risk factor for asthma in adults. Sera were assayed for IgE antibody (Ab) to dust mites, cockroach, cat dander, and grass and ragweed pollen. The results demonstrate that in adults younger than 50 years of age, the prevalence of IgE Abs was fourfold greater among subjects with asthma than among control subjects (46/67 versus 12/81; odds ratio, 10.1; 95% confidence interval, 4.9 to 20.7). The population attributable risk for the presence of IgE Ab to one of the five allergens was greater than 50%. Among individuals older than 50 years of age, the prevalence of serum IgE Abs was not significantly increased among patients with acute airway obstruction. In the whole group, the prevalence of IgE Abs to different allergens demonstrated significant seasonal and socioeconomic differences, suggesting that the associated risk is related to exposure to those allergens. The results establish that, with acute attacks of asthma as a marker for adult asthma, the presence of serum IgE Abs to common inhalant allergens is a major risk factor.(ABSTRACT TRUNCATED AT 250 WORDS)

Lyndsey A. Darrow,  Jeremy Hess,  Christine A. Rogers … (2012)
Previous studies report associations between aeroallergen exposure and asthma exacerbations. Aeroallergen burdens and asthma prevalence are increasing worldwide and are projected to increase further with climate change, highlighting the importance of understanding population-level relationships between ambient pollen concentrations and asthma. We sought to examine short-term associations between ambient concentrations of various pollen taxa and emergency department (ED) visits for asthma and wheeze in the Atlanta metropolitan area between 1993 and 2004. We assessed associations between the 3-day moving average (lag 0-1-2) of Betulaceae (except Alnus species), Cupressaceae, Quercus species, Pinaceae (except Tsuga species), Poaceae, and Ambrosia species pollen concentrations and daily asthma and wheeze ED visit counts, controlling for covarying pollen taxa and ambient pollutant concentrations. We observed a 2% to 3% increase in asthma- and wheeze-related ED visits per SD increase in Quercus species and Poaceae pollen and a 10% to 15% increased risk on days with the highest concentrations (comparing the top 5% of days with the lowest 50% of days). An SD increase in Cupressaceae concentrations was associated with a 1% decrease in ED visits. The association for Quercus species pollen was strongest for children aged 5 to 17 years. Effects of Ambrosia species pollen on asthma exacerbations were difficult to assess in this large-scale temporal analysis because of possible confounding by the steep increase in circulating rhinoviruses every September. Poaceae and Quercus species pollen contribute to asthma morbidity in Atlanta. Altered Quercus species and Poaceae pollen production caused by climate change could affect allergen-induced asthma morbidity in the southeastern United States. Copyright © 2012 American Academy of Allergy, Asthma & Immunology. Published by Mosby, Inc. All rights reserved.

This is an Open Access article distributed under the terms of the Creative Commons Attribution Non-Commercial License ( https://creativecommons.org/licenses/by-nc/4.0/) which permits unrestricted non-commercial use, distribution, and reproduction in any medium, provided the original work is properly cited.