Arginine methylation of Piwi proteins, catalyzed by dPRMT5, is required for Ago3 and Aub stability 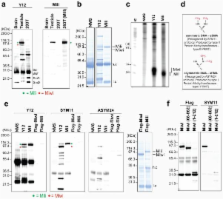 Piwi family proteins are essential for germline development and bind piwi-interacting RNAs (piRNAs 1 2 3). The grandchildless gene aub of Drosophila melanogaster encodes the piRNA-binding protein Aub that is essential for formation of primordial germ cells (PGCs) 4. Here we report that mouse, Xenopus laevis and Drosophila melanogaster Piwi family proteins contain symmetrical dimethylarginines (sDMAs). We find that Piwi proteins are expressed in X. laevis oocytes and we identify numerous X. laevis piRNAs. We report that the Drosophila homolog of protein methyltransferase 5 ( dPRMT5, csul/dart5), which is also the product of a grandchildless gene 5, 6, is required for arginine methylation of Drosophila Piwi, Ago3 and Aub proteins, in vivo. Loss of dPRMT5 activity leads to reduction of piRNAs and in particular of Ago3 and Aub protein levels and accumulation of retrotransposons in the Drosophila ovary. Our studies explain the relationship between aub and dPRMT5 (csul/dart5) genes by demonstrating that dPRMT5 is the enzyme that methylates Aub. Our findings underscore the significance of sDMA modification of Piwi proteins in the germline and suggest an interacting pathway of genes that are required for piRNA function and PGC specification.

Linda C. Li,  Phillip Zamore,  Alla A. Sigova … (2006)
In the Drosophila germline, repeat-associated small interfering RNAs (rasiRNAs) ensure genomic stability by silencing endogenous selfish genetic elements such as retrotransposons and repetitive sequences. Whereas small interfering RNAs (siRNAs) derive from both the sense and antisense strands of their double-stranded RNA precursors, rasiRNAs arise mainly from the antisense strand. rasiRNA production appears not to require Dicer-1, which makes microRNAs (miRNAs), or Dicer-2, which makes siRNAs, and rasiRNAs lack the 2',3' hydroxy termini characteristic of animal siRNA and miRNA. Unlike siRNAs and miRNAs, rasiRNAs function through the Piwi, rather than the Ago, Argonaute protein subfamily. Our data suggest that rasiRNAs protect the fly germline through a silencing mechanism distinct from both the miRNA and RNA interference pathways.

A slicer-mediated mechanism for repeat-associated siRNA 5' end formation in Drosophila.

Mikiko C Siomi,  Kuniaki Saito,  K Miyoshi … (2007)
In Drosophila, repeat-associated small interfering RNAs (rasiRNAs) are produced in the germ line by a Dicer-independent pathway and function through the PIWI subfamily of Argonautes to ensure silencing of retrotransposons. We sequenced small RNAs associated with the PIWI subfamily member AGO3. Although other members of PIWI, Aubergine (Aub) and Piwi, associated with rasiRNAs derived mainly from the antisense strand of retrotransposons, AGO3-associated rasiRNAs arose mainly from the sense strand. Aub- and Piwi-associated rasiRNAs showed a strong preference for uracil at their 5' ends, and AGO3-associated rasiRNAs showed a strong preference for adenine at nucleotide 10. Comparisons between AGO3- and Aub-associated rasiRNAs revealed pairs of rasiRNAs showing complementarities in their first 10 nucleotides. Aub and AGO3 exhibited Slicer activity in vitro. These data support a model in which formation of a 5' terminus within rasiRNA precursors is guided by rasiRNAs originating from transcripts of the other strand in concert with the Slicer activity of PIWI.

A role for Piwi and piRNAs in germ cell maintenance and transposon silencing in Zebrafish.

H Blaser,  Cecilia B Moens,  Yvette A. Girard … (2007)
Piwi proteins specify an animal-specific subclass of the Argonaute family that, in vertebrates, is specifically expressed in germ cells. We demonstrate that zebrafish Piwi (Ziwi) is expressed in both the male and the female gonad and is a component of a germline-specifying structure called nuage. Loss of Ziwi function results in a progressive loss of germ cells due to apoptosis during larval development. In animals that have reduced Ziwi function, germ cells are maintained but display abnormal levels of apoptosis in adults. In mammals, Piwi proteins associate with approximately 29-nucleotide-long, testis-specific RNA molecules called piRNAs. Here we show that zebrafish piRNAs are present in both ovary and testis. Many of these are derived from transposons, implicating a role for piRNAs in the silencing of repetitive elements in vertebrates. Furthermore, we show that piRNAs are Dicer independent and that their 3' end likely carries a 2'O-Methyl modification.