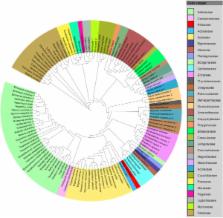 Herbal products available to consumers in the marketplace may be contaminated or substituted with alternative plant species and fillers that are not listed on the labels. According to the World Health Organization, the adulteration of herbal products is a threat to consumer safety. Our research aimed to investigate herbal product integrity and authenticity with the goal of protecting consumers from health risks associated with product substitution and contamination.

We used DNA barcoding to conduct a blind test of the authenticity for (i) 44 herbal products representing 12 companies and 30 different species of herbs, and (ii) 50 leaf samples collected from 42 herbal species. Our laboratory also assembled the first standard reference material (SRM) herbal barcode library from 100 herbal species of known provenance that were used to identify the unknown herbal products and leaf samples.

We recovered DNA barcodes from most herbal products (91%) and all leaf samples (100%), with 95% species resolution using a tiered approach ( rbcL + ITS2). Most (59%) of the products tested contained DNA barcodes from plant species not listed on the labels. Although we were able to authenticate almost half (48%) of the products, one-third of these also contained contaminants and or fillers not listed on the label. Product substitution occurred in 30/44 of the products tested and only 2/12 companies had products without any substitution, contamination or fillers. Some of the contaminants we found pose serious health risks to consumers.

Most of the herbal products tested were of poor quality, including considerable product substitution, contamination and use of fillers. These activities dilute the effectiveness of otherwise useful remedies, lowering the perceived value of all related products because of a lack of consumer confidence in them. We suggest that the herbal industry should embrace DNA barcoding for authenticating herbal products through testing of raw materials used in manufacturing products. The use of an SRM DNA herbal barcode library for testing bulk materials could provide a method for 'best practices? in the manufacturing of herbal products. This would provide consumers with safe, high quality herbal products.

A DNA barcode for land plants.

(2009)
DNA barcoding involves sequencing a standard region of DNA as a tool for species identification. However, there has been no agreement on which region(s) should be used for barcoding land plants. To provide a community recommendation on a standard plant barcode, we have compared the performance of 7 leading candidate plastid DNA regions (atpF-atpH spacer, matK gene, rbcL gene, rpoB gene, rpoC1 gene, psbK-psbI spacer, and trnH-psbA spacer). Based on assessments of recoverability, sequence quality, and levels of species discrimination, we recommend the 2-locus combination of rbcL+matK as the plant barcode. This core 2-locus barcode will provide a universal framework for the routine use of DNA sequence data to identify specimens and contribute toward the discovery of overlooked species of land plants.

Shilin Chen,  Hui-min Yao,  Jianping Han … (2010)
Background The plant working group of the Consortium for the Barcode of Life recommended the two-locus combination of rbcL + matK as the plant barcode, yet the combination was shown to successfully discriminate among 907 samples from 550 species at the species level with a probability of 72%. The group admits that the two-locus barcode is far from perfect due to the low identification rate, and the search is not over. Methodology/Principal Findings Here, we compared seven candidate DNA barcodes (psbA-trnH, matK, rbcL, rpoC1, ycf5, ITS2, and ITS) from medicinal plant species. Our ranking criteria included PCR amplification efficiency, differential intra- and inter-specific divergences, and the DNA barcoding gap. Our data suggest that the second internal transcribed spacer (ITS2) of nuclear ribosomal DNA represents the most suitable region for DNA barcoding applications. Furthermore, we tested the discrimination ability of ITS2 in more than 6600 plant samples belonging to 4800 species from 753 distinct genera and found that the rate of successful identification with the ITS2 was 92.7% at the species level. Conclusions The ITS2 region can be potentially used as a standard DNA barcode to identify medicinal plants and their closely related species. We also propose that ITS2 can serve as a novel universal barcode for the identification of a broader range of plant taxa.

This is an open access article distributed under the terms of the Creative Commons Attribution License (http://creativecommons.org/licenses/by/2.0), which permits unrestricted use, distribution, and reproduction in any medium, provided the original work is properly cited.