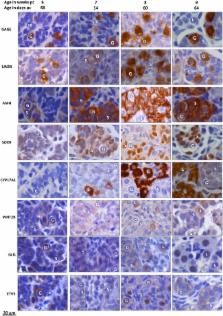 The precise timing and sequence of changes in expression of key genes and proteins during human sex-differentiation and onset of steroidogenesis was evaluated by whole-genome expression in 67 first trimester human embryonic and fetal ovaries and testis and confirmed by qPCR and immunohistochemistry (IHC). SRY/SOX9 expression initiated in testis around day 40 pc, followed by initiation of AMH and steroidogenic genes required for androgen production at day 53 pc. In ovaries, gene expression of RSPO1, LIN28, FOXL2, WNT2B, and ETV5, were significantly higher than in testis, whereas GLI1 was significantly higher in testis than ovaries. Gene expression was confirmed by IHC for GAGE, SOX9, AMH, CYP17A1, LIN28, WNT2B, ETV5 and GLI1. Gene expression was not associated with the maternal smoking habits. Collectively, a precise temporal determination of changes in expression of key genes involved in human sex-differentiation is defined, with identification of new genes of potential importance.

Wolfgang Huber,  Robert C Gentleman,  Richard Bourgon (2010)
With high-dimensional data, variable-by-variable statistical testing is often used to select variables whose behavior differs across conditions. Such an approach requires adjustment for multiple testing, which can result in low statistical power. A two-stage approach that first filters variables by a criterion independent of the test statistic, and then only tests variables which pass the filter, can provide higher power. We show that use of some filter/test statistics pairs presented in the literature may, however, lead to loss of type I error control. We describe other pairs which avoid this problem. In an application to microarray data, we found that gene-by-gene filtering by overall variance followed by a t-test increased the number of discoveries by 50%. We also show that this particular statistic pair induces a lower bound on fold-change among the set of discoveries. Independent filtering-using filter/test pairs that are independent under the null hypothesis but correlated under the alternative-is a general approach that can substantially increase the efficiency of experiments.

Jordan Kreidberg,  Hannu Sariola,  Janet M. Loring … (1993)
In humans, germline mutations of the WT-1 tumor suppressor gene are associated with both Wilms' tumors and urogenital malformations. To develop a model system for the molecular analysis of urogenital development, we introduced a mutation into the murine WT-1 tumor suppressor gene by gene targeting in embryonic stem cells. The mutation resulted in embryonic lethality in homozygotes, and examination of mutant embryos revealed a failure of kidney and gonad development. Specifically, at day 11 of gestation, the cells of the metanephric blastema underwent apoptosis, the ureteric bud failed to grow out from the Wolffian duct, and the inductive events that lead to formation of the metanephric kidney did not occur. In addition, the mutation caused abnormal development of the mesothelium, heart, and lungs. Our results establish a crucial role for WT-1 in early urogenital development.