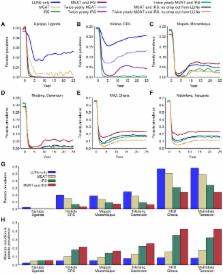 Over the past decade malaria intervention coverage has been scaled up across Africa. However, it remains unclear what overall reduction in transmission is achievable using currently available tools.

We developed an individual-based simulation model for Plasmodium falciparum transmission in an African context incorporating the three major vector species ( Anopheles gambiae s.s., An. arabiensis, and An. funestus) with parameters obtained by fitting to parasite prevalence data from 34 transmission settings across Africa. We incorporated the effect of the switch to artemisinin-combination therapy (ACT) and increasing coverage of long-lasting insecticide treated nets (LLINs) from the year 2000 onwards. We then explored the impact on transmission of continued roll-out of LLINs, additional rounds of indoor residual spraying (IRS), mass screening and treatment (MSAT), and a future RTS,S/AS01 vaccine in six representative settings with varying transmission intensity (as summarized by the annual entomological inoculation rate, EIR: 1 setting with low, 3 with moderate, and 2 with high EIRs), vector–species combinations, and patterns of seasonality. In all settings we considered a realistic target of 80% coverage of interventions. In the low-transmission setting (EIR∼3 ibppy [infectious bites per person per year]), LLINs have the potential to reduce malaria transmission to low levels (<1% parasite prevalence in all age-groups) provided usage levels are high and sustained. In two of the moderate-transmission settings (EIR∼43 and 81 ibppy), additional rounds of IRS with DDT coupled with MSAT could drive parasite prevalence below a 1% threshold. However, in the third (EIR = 46) with An. arabiensis prevailing, these interventions are insufficient to reach this threshold. In both high-transmission settings (EIR∼586 and 675 ibppy), either unrealistically high coverage levels (>90%) or novel tools and/or substantial social improvements will be required, although considerable reductions in prevalence can be achieved with existing tools and realistic coverage levels.

Interventions using current tools can result in major reductions in P. falciparum malaria transmission and the associated disease burden in Africa. Reduction to the 1% parasite prevalence threshold is possible in low- to moderate-transmission settings when vectors are primarily endophilic (indoor-resting), provided a comprehensive and sustained intervention program is achieved through roll-out of interventions. In high-transmission settings and those in which vectors are mainly exophilic (outdoor-resting), additional new tools that target exophagic (outdoor-biting), exophilic, and partly zoophagic mosquitoes will be required.

Half the world's population is at risk of malaria, and every year nearly one million people—mainly children living in sub-Saharan Africa—die from this mosquito-borne parasitic disease. Most malarial deaths are caused by Plasmodium falciparum, which is transmitted to people by mainly night-biting Anopheles mosquitoes. When infected mosquitoes feed on people, they inject sporozoites, a parasitic form that replicates inside human liver cells. After a few days, the liver cells release “merozoites,” which invade red blood cells where they replicate rapidly before bursting out and infecting more red blood cells. This increase in the parasitic burden causes malaria's characteristic fever. Infected red blood cells also release “gametocytes,” which infect mosquitoes when they take a blood meal. In the mosquito, the gametocytes multiply and develop into sporozoites, thus completing the parasite's life cycle. Malaria can be prevented by spraying the insides of houses (where most Anopheles species feed and rest) with insecticides (indoor residual spraying, IRS) and by sleeping under bed nets that have been treated with long-lasting insecticides (long-lasting insecticide nets, LLINs). Mass screening and treatment (MSAT) with effective antimalarial drugs can also reduce malaria transmission.

Early attempts to eradicate malaria (reduce its global incidence to zero) in the 1950s reduced the incidence of malaria to zero in some countries (malaria elimination) and greatly reduced malarial illnesses and deaths in others (malaria control). However, this eradication program was aborted in the 1970s in part because of emerging drug and insecticide resistance. Recently, the advent of artemisinin-based combination therapies and new insecticides and the prospect of a malaria vaccine have renewed interest in controlling, eliminating, and ultimately eradicating malaria. Consequently, in September 2008, the Roll Back Malaria Partnership launched the Global Malaria Action Plan, which aims to reduce malaria deaths to near zero by 2015. But are the currently available tools for reducing malaria transmission sufficient to control and eliminate malaria in Africa, the continent where most malaria deaths occur? In this study, the researchers use a new mathematical model of P. falciparum transmission to investigate this question.

The researchers' P. falciparum transmission model consists of “compartments” through which individuals pass as they become infected with parasites, develop immunity, become infectious to mosquitoes, and so on. The researchers used published data about parasite prevalence (the proportion of the population infected with parasites) and about relevant aspects of mosquito, parasite, and human biology, to estimate the chances of an individual moving between compartments. Finally, they used the model to explore the impact over 25 years of increased coverage of LLINs, IRS, and MSAT, and of a future vaccine on malaria transmission in six representative African settings. In a low-transmission setting, 80% coverage with LLINs reduced the parasite prevalence to below 1% in all age groups. In two moderate-transmission settings, LLIN scale-up alone failed to reach this target but the addition of IRS and MSAT drove the parasite prevalence below 1%. However, this combination of interventions did not control malaria in a moderate-transmission setting in which a mosquito species that bites and rests outside houses contributes to malaria transmission. Finally, in two high-transmission settings, parasite prevalence could be driven below 1% only by setting unrealistic coverage targets for existing interventions.

This new mathematical model greatly simplifies the complex dynamics of malaria transmission and includes several assumptions about which there is considerable uncertainty. The findings of this study are not, therefore, firm predictions of the future of malaria control in specific settings. Nevertheless, they suggest that it should be possible to make large reductions in malaria transmission and the associated disease burden in Africa over the next 25 years using currently available tools. Specifically, in regions where transmission is low or moderate and mosquitoes mainly feed indoors, it should be possible to reduce parasite prevalence to less than 1% provided a sustained intervention program is achieved. Importantly, however, these findings suggest that in regions where malaria transmission is high or where mosquitoes rest and bite outside houses, new approaches will be needed to control and eliminate malaria.

Publisher ID: 10-PLME-RA-4331R2
DOI: 10.1371/journal.pmed.1000324
PMC ID: 2919425
PubMed ID: 20711482
Copyright statement: Griffin et al. This is an open-access article distributed under the terms of the Creative Commons Attribution License, which permits unrestricted use, distribution, and reproduction in any medium, provided the original author and source are credited.