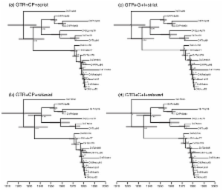 The evolutionary analysis of molecular sequence variation is a statistical enterprise. This is reflected in the increased use of probabilistic models for phylogenetic inference, multiple sequence alignment, and molecular population genetics. Here we present BEAST: a fast, flexible software architecture for Bayesian analysis of molecular sequences related by an evolutionary tree. A large number of popular stochastic models of sequence evolution are provided and tree-based models suitable for both within- and between-species sequence data are implemented.

A codon-based model of nucleotide substitution for protein-coding DNA sequences.

(1994)
A codon-based model for the evolution of protein-coding DNA sequences is presented for use in phylogenetic estimation. A Markov process is used to describe substitutions between codons. Transition/transversion rate bias and codon usage bias are allowed in the model, and selective restraints at the protein level are accommodated using physicochemical distances between the amino acids coded for by the codons. Analyses of two data sets suggest that the new codon-based model can provide a better fit to data than can nucleotide-based models and can produce more reliable estimates of certain biologically important measures such as the transition/transversion rate ratio and the synonymous/nonsynonymous substitution rate ratio.

J Carter Thorne,  H Kishino,  Michele S. Painter (1998)
A simple model for the evolution of the rate of molecular evolution is presented. With a Bayesian approach, this model can serve as the basis for estimating dates of important evolutionary events even in the absence of the assumption of constant rates among evolutionary lineages. The method can be used in conjunction with any of the widely used models for nucleotide substitution or amino acid replacement. It is illustrated by analyzing a data set of rbcL protein sequences.