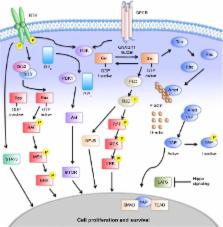 Uveal melanoma (UM) is the most common intraocular malignancy and arises from melanocytes in the iris, ciliary body, or choroid. Early diagnosis and local treatment is crucial, as survival correlates with primary tumor size. However, approximately 50% of patients will develop metastatic disease with 6–12 months’ survival from metastatic diagnosis. Genomic analyses have led to the development of gene-expression profiles that effectively predict metastatic progression; unfortunately, no adjuvant therapy has been shown to prolong survival to date. New insights into the molecular biology of UM have found frequent activating mutations in genes encoding for the G-protein α-subunit, GNAQ and GNA11, and improved understanding of the downstream signaling pathways MAPK, PI3K/Akt, and Hippo have afforded an array of new targets for treatment of this disease. Studies are under way with rationally developed regimens targeting these pathways, and novel agents are under development. We review the diagnosis, management, and surveillance of primary UM and the adjuvant therapy trials under way.

Mutations in GNA11 in uveal melanoma.

Xiaodong Feng,  Maria Degese,  Ramiro Iglesias-Bartolomé … (2014)
Mutually exclusive activating mutations in the GNAQ and GNA11 oncogenes, encoding heterotrimeric Gαq family members, have been identified in ∼ 83% and ∼ 6% of uveal and skin melanomas, respectively. However, the molecular events underlying these GNAQ-driven malignancies are not yet defined, thus limiting the ability to develop cancer-targeted therapies. Here, we focused on the transcriptional coactivator YAP, a critical component of the Hippo signaling pathway that controls organ size. We found that Gαq stimulates YAP through a Trio-Rho/Rac signaling circuitry promoting actin polymerization, independently of phospholipase Cβ and the canonical Hippo pathway. Furthermore, we show that Gαq promotes the YAP-dependent growth of uveal melanoma cells, thereby identifying YAP as a suitable therapeutic target in uveal melanoma, a GNAQ/GNA11-initiated human malignancy. Copyright © 2014 Elsevier Inc. All rights reserved.

Novel therapeutic inhibitors of the c-Met signaling pathway in cancer.

G F Vande Woude,  Kai J. Eder,  Patricia M. LoRusso … (2009)
A wide variety of human malignancies exhibit sustained c-Met stimulation, overexpression, or mutation, including carcinomas of the breast, liver, lung, ovary, kidney, and thyroid. Notably, activating mutations in c-Met have been positively identified in patients with a particular hereditary form of papillary renal cancer, directly implicating c-Met in human tumorigenesis. Aberrant signaling of the c-Met signaling pathway due to dysregulation of the c-Met receptor or overexpression of its ligand, hepatocyte growth factor (HGF), has been associated with an aggressive phenotype. Extensive evidence that c-Met signaling is involved in the progression and spread of several cancers and an enhanced understanding of its role in disease have generated considerable interest in c-Met and HGF as major targets in cancer drug development. This has led to the development of a variety of c-Met pathway antagonists with potential clinical applications. The three main approaches of pathway-selective anticancer drug development have included antagonism of ligand/receptor interaction, inhibition of the tyrosine kinase catalytic activity, and blockade of the receptor/effector interaction. Several c-Met antagonists are now under clinical investigation. Preliminary clinical results of several of these agents, including both monoclonal antibodies and small-molecule tyrosine kinase inhibitors, have been encouraging. Several multitargeted therapies have also been under investigation in the clinic and have demonstrated promise, particularly with regard to tyrosine kinase inhibition.