Impact of levothyroxine therapy on obstetric, neonatal and childhood outcomes in women with subclinical hypothyroidism diagnosed in pregnancy: a systematic review and meta-analysis of randomised controlled trials 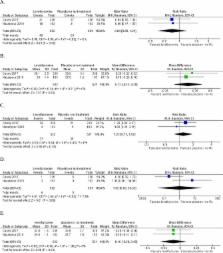 Randomised trials which met all the following were included: (1) reported original data of women with subclinical hypothyroidism diagnosed in pregnancy (by any prespecified study definition); (2) randomised to either levothyroxine or control (placebo or no treatment); (3) reported obstetrical outcomes and/or childhood neurodevelopmental outcomes and (4) published from 1980 to January 2018 in either English or French language.

Three trials of low to unclear risk of bias with 1837 participants were included. Two studies were meta-analysed for maternal and neonatal outcomes and two studies for childhood IQ. No statistically significant differences were found for any clinical outcomes with levothyroxine therapy compared with control.

Only three trials were identified for inclusion.

Maternal thyroid deficiency during pregnancy and subsequent neuropsychological development of the child.

Thomas Allan,  J. Williams,  Richard S. G. Knight … (1999)
When thyroid deficiency occurs simultaneously in a pregnant woman and her fetus, the child's neuropsychological development is adversely affected. Whether developmental problems occur when only the mother has hypothyroidism during pregnancy is not known. In 1996 and 1997, we measured thyrotropin in stored serum samples collected from 25,216 pregnant women between January 1987 and March 1990. We then located 47 women with serum thyrotropin concentrations at or above the 99.7th percentile of the values for all the pregnant women, 15 women with values between the 98th and 99.6th percentiles, inclusive, in combination with low thyroxine levels, and 124 matched women with normal values. Their seven-to-nine-year-old children, none of whom had hypothyroidism as newborns, underwent 15 tests relating to intelligence, attention, language, reading ability, school performance, and visual-motor performance. The children of the 62 women with high serum thyrotropin concentrations performed slightly less well on all 15 tests. Their full-scale IQ scores on the Wechsler Intelligence Scale for Children, third edition, averaged 4 points lower than those of the children of the 124 matched control women (P= 0.06); 15 percent had scores of 85 or less, as compared with 5 percent of the matched control children. Of the 62 women with thyroid deficiency, 48 were not treated for the condition during the pregnancy under study. The full-scale IQ scores of their children averaged 7 points lower than those of the 124 matched control children (P=0.005); 19 percent had scores of 85 or less. Eleven years after the pregnancy under study, 64 percent of the untreated women and 4 percent of the matched control women had confirmed hypothyroidism. Undiagnosed hypothyroidism in pregnant women may adversely affect their fetuses; therefore, screening for thyroid deficiency during pregnancy may be warranted.

2017 Guidelines of the American Thyroid Association for the Diagnosis and Management of Thyroid Disease During Pregnancy and the Postpartum.

Erik Alexander,  Elizabeth N Pearce,  Gregory A Brent … (2017)
Thyroid disease in pregnancy is a common clinical problem. Since the guidelines for the management of these disorders by the American Thyroid Association (ATA) were first published in 2011, significant clinical and scientific advances have occurred in the field. The aim of these guidelines is to inform clinicians, patients, researchers, and health policy makers on published evidence relating to the diagnosis and management of thyroid disease in women during pregnancy, preconception, and the postpartum period.