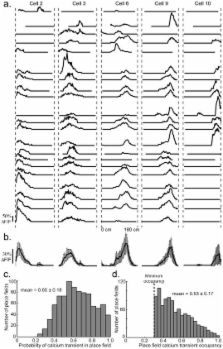 Spatial navigation is a widely employed behavior in rodent studies of neuronal circuits underlying cognition, learning and memory. In vivo microscopy combined with genetically-encoded indicators provides important new tools to study neuronal circuits, but has been technically difficult to apply during navigation. We describe methods to image the activity of hippocampal CA1 neurons with sub-cellular resolution in behaving mice. Neurons expressing the genetically encoded calcium indicator GCaMP3 were imaged through a chronic hippocampal window. Head-fixed mice performed spatial behaviors within a setup combining a virtual reality system and a custom built two-photon microscope. Populations of place cells were optically identified, and the correlation between the location of their place fields in the virtual environment and their anatomical location in the local circuit was measured. The combination of virtual reality and high-resolution functional imaging should allow for a new generation of studies to probe neuronal circuit dynamics during behavior.

The hippocampus as a spatial map. Preliminary evidence from unit activity in the freely-moving rat.

György Buzsáki (2004)
How does the brain orchestrate perceptions, thoughts and actions from the spiking activity of its neurons? Early single-neuron recording research treated spike pattern variability as noise that needed to be averaged out to reveal the brain's representation of invariant input. Another view is that variability of spikes is centrally coordinated and that this brain-generated ensemble pattern in cortical structures is itself a potential source of cognition. Large-scale recordings from neuronal ensembles now offer the opportunity to test these competing theoretical frameworks. Currently, wire and micro-machined silicon electrode arrays can record from large numbers of neurons and monitor local neural circuits at work. Achieving the full potential of massively parallel neuronal recordings, however, will require further development of the neuron-electrode interface, automated and efficient spike-sorting algorithms for effective isolation and identification of single neurons, and new mathematical insights for the analysis of network properties.