Molecular diversity of coronaviruses in bats 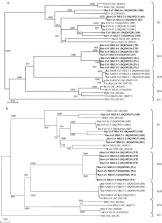 P Rota (2003)
In March 2003, a novel coronavirus (SARS-CoV) was discovered in association with cases of severe acute respiratory syndrome (SARS). The sequence of the complete genome of SARS-CoV was determined, and the initial characterization of the viral genome is presented in this report. The genome of SARS-CoV is 29,727 nucleotides in length and has 11 open reading frames, and its genome organization is similar to that of other coronaviruses. Phylogenetic analyses and sequence comparisons showed that SARS-CoV is not closely related to any of the previously characterized coronaviruses.

Isolation and characterization of viruses related to the SARS coronavirus from animals in southern China.

Y Guan (2003)
A novel coronavirus (SCoV) is the etiological agent of severe acute respiratory syndrome (SARS). SCoV-like viruses were isolated from Himalayan palm civets found in a live-animal market in Guangdong, China. Evidence of virus infection was also detected in other animals (including a raccoon dog, Nyctereutes procyonoides) and in humans working at the same market. All the animal isolates retain a 29-nucleotide sequence that is not found in most human isolates. The detection of SCoV-like viruses in small, live wild mammals in a retail market indicates a route of interspecies transmission, although the natural reservoir is not known.

S K P Lau, P Woo, K. S. M. Li … (2005)
Although the finding of severe acute respiratory syndrome coronavirus (SARS-CoV) in caged palm civets from live animal markets in China has provided evidence for interspecies transmission in the genesis of the SARS epidemic, subsequent studies suggested that the civet may have served only as an amplification host for SARS-CoV. In a surveillance study for CoV in noncaged animals from the wild areas of the Hong Kong Special Administration Region, we identified a CoV closely related to SARS-CoV (bat-SARS-CoV) from 23 (39%) of 59 anal swabs of wild Chinese horseshoe bats (Rhinolophus sinicus) by using RT-PCR. Sequencing and analysis of three bat-SARS-CoV genomes from samples collected at different dates showed that bat-SARS-CoV is closely related to SARS-CoV from humans and civets. Phylogenetic analysis showed that bat-SARS-CoV formed a distinct cluster with SARS-CoV as group 2b CoV, distantly related to known group 2 CoV. Most differences between the bat-SARS-CoV and SARS-CoV genomes were observed in the spike genes, ORF 3 and ORF 8, which are the regions where most variations also were observed between human and civet SARS-CoV genomes. In addition, the presence of a 29-bp insertion in ORF 8 of bat-SARS-CoV genome, not in most human SARS-CoV genomes, suggests that it has a common ancestor with civet SARS-CoV. Antibody against recombinant bat-SARS-CoV nucleocapsid protein was detected in 84% of Chinese horseshoe bats by using an enzyme immunoassay. Neutralizing antibody to human SARS-CoV also was detected in bats with lower viral loads. Precautions should be exercised in the handling of these animals.

These authors are co-principal investigators and contributed the same to the manuscript.