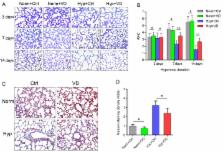 With considerable morbidity and mortality, bron-chopulmonary dysplasia (BPD) is a focus of attention in neonatology. Hyperoxia-induced lung injury has long been used as a model of BPD. Among all the signaling pathways involved, Toll-like receptor 4 (TLR4) has been demonstrated to play an important role, and is known to be regulated by vitamin D. This study aimed at elucidating the effect of vitamin D on hyperoxia-induced lung injury and the role of TLR4 in the process. Vitamin D was administered to hyperoxia-treated neonatal rats to investigate changes in the morphology of lungs and expression of pro-inflammatory cytokines, apoptotic proteins and TLR4. Vitamin D attenuated hyperoxia-induced lung injury by protecting the integrity of the lung structure, decreasing extracellular matrix deposition and inhibiting inflammation. The upregulation of TLR4 by hyperoxia was ameliorated by vitamin D and apoptosis was reduced. Vitamin D administration antagonized the activation of TLR4 and therefore alleviated inflammation, reduced apoptosis and preserved lung structure.

Monica Molteni,  Sabrina Gemma,  Carlo Rossetti (2016)
Toll-like receptor 4 (TLR4) belongs to the family of pattern recognition receptors (PRRs). They are highly conserved receptors that recognize conserved pathogen-associated molecular patterns (PAMPs), thus representing the first line of defense against infections. TLR4 has been long recognized as the sensing receptor for gram-negative lipopolysaccharide (LPS). In addition, it also binds endogenous molecules produced as a result of tissue injury. Hence, TLR4 represents a key receptor on which both infectious and noninfectious stimuli converge to induce a proinflammatory response. TLR4-mediated inflammation, triggered by exogenous or endogenous ligands, is also involved in several acute and chronic diseases, having a pivotal role as amplifier of the inflammatory response. This review focuses on the research progress about the role of TLR4 activation in infectious and noninfectious (e.g., sterile) inflammation and the effects of TLR4 signaling in some pathological conditions.

Recent advances in the mechanisms of lung alveolarization and the pathogenesis of bronchopulmonary dysplasia.

Diogo M G Silva,  Claudio Nardiello,  Agnieszka Pozarska … (2015)
Alveolarization is the process by which the alveoli, the principal gas exchange units of the lung, are formed. Along with the maturation of the pulmonary vasculature, alveolarization is the objective of late lung development. The terminal airspaces that were formed during early lung development are divided by the process of secondary septation, progressively generating an increasing number of alveoli that are of smaller size, which substantially increases the surface area over which gas exchange can take place. Disturbances to alveolarization occur in bronchopulmonary dysplasia (BPD), which can be complicated by perturbations to the pulmonary vasculature that are associated with the development of pulmonary hypertension. Disturbances to lung development may also occur in persistent pulmonary hypertension of the newborn in term newborn infants, as well as in patients with congenital diaphragmatic hernia. These disturbances can lead to the formation of lungs with fewer and larger alveoli and a dysmorphic pulmonary vasculature. Consequently, affected lungs exhibit a reduced capacity for gas exchange, with important implications for morbidity and mortality in the immediate postnatal period and respiratory health consequences that may persist into adulthood. It is the objective of this Perspectives article to update the reader about recent developments in our understanding of the molecular mechanisms of alveolarization and the pathogenesis of BPD.