Hypertensive nephrosclerosis is among the leading causes of end-stage renal disease, but its pathophysiology is poorly understood. We wanted to explore early metabolic changes using gene expression and targeted metabolomics analysis.

We analyzed gene expression in kidneys biopsied from 20 patients with nephrosclerosis and 31 healthy controls with an Affymetrix array. Thirty-one amino acids were measured by liquid chromatography coupled with mass spectrometry (LC-MS) in urine samples from 62 patients with clinical hypertensive nephrosclerosis and 33 age- and sex-matched healthy controls, and major findings were confirmed in an independent cohort of 45 cases and 15 controls.

Amino acid catabolism and synthesis were strongly underexpressed in hypertensive nephrosclerosis (13- and 7-fold, respectively), and these patients also showed gene expression patterns indicating decreased fatty acid oxidation (12-fold) and increased interferon gamma (10-fold) and cellular defense response (8-fold). Metabolomics analysis revealed significant distribution differences in 11 amino acids in hypertensive nephrosclerosis, among them tyrosine, phenylalanine, dopamine, homocysteine, and serine, with 30% to 70% lower urine excretion. These findings were replicated in the independent cohort. Integrated gene-metabolite pathway analysis showed perturbations of renal dopamine biosynthesis. There were also significant differences in homocysteine/methionine homeostasis and the serine pathway, which have strong influence on 1-carbon metabolism. Several of these disturbances could be interconnected through reduced regeneration of tetrahydrofolate and tetrahydrobiopterin.

Early hypertensive nephrosclerosis showed perturbations of intrarenal biosynthesis of dopamine, which regulates natriuresis and blood pressure. There were also disturbances in serine/glycine and methionine/homocysteine metabolism, which may contribute to endothelial dysfunction, atherosclerosis, and renal fibrosis. 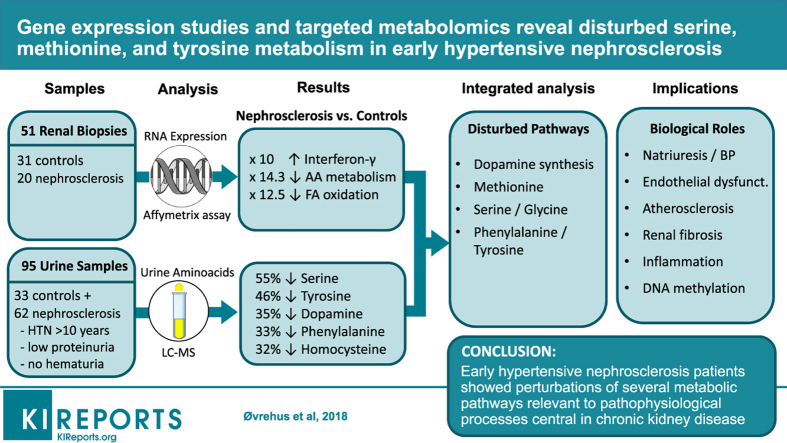 The association between age and nephrosclerosis on renal biopsy among healthy adults.

Eoin O’Sullivan (corresponding) ,  Jeremy Hughes,  David A Ferenbach (2017)
Individuals age >65 years old are the fastest expanding population demographic throughout the developed world. Consequently, more aged patients than before are receiving diagnoses of impaired renal function and nephrosclerosis-age-associated histologic changes in the kidneys. Recent studies have shown that the aged kidney undergoes a range of structural changes and has altered transcriptomic, hemodynamic, and physiologic behavior at rest and in response to renal insults. These changes impair the ability of the kidney to withstand and recover from injury, contributing to the high susceptibility of the aged population to AKI and their increased propensity to develop subsequent progressive CKD. In this review, we examine these features of the aged kidney and explore the various validated and putative pathways contributing to the changes observed with aging in both experimental animal models and humans. We also discuss the potential for additional study to increase understanding of the aged kidney and lead to novel therapeutic strategies.

The Hordaland Homocysteine Study: a community-based study of homocysteine, its determinants, and associations with disease.

C. G. Gjesdal,  S. E. Vollset,  Eha Nurk … (2006)
The Hordaland Homocysteine Study (HHS) is a population-based study of more than 18,000 men and women in the county of Hordaland in Western Norway. The first investigation (HHS-I) took place in 1992-93, when the subjects were aged 40-67 y. In 1997-99, a follow-up study (HHS-II) of 7,053 subjects was carried out. In this large population, plasma levels of total homocysteine (tHcy) are associated with several physiologic and lifestyle factors and common diseases. Increasing age, male sex, smoking, coffee consumption, high blood pressure, unfavorable lipid profile, high creatinine, and the MTHFR 677C > T polymorphism are among the factors associated with increased tHcy levels; physical activity, moderate alcohol consumption, and a good folate or vitamin B-12 status are associated with lower tHcy levels. Subjects with raised tHcy levels have increased risk of cardiovascular morbidity, cardiovascular and noncardiovascular mortality, and are more likely to suffer from depression and from cognitive deficit (elderly). Among women, raised tHcy levels are associated with decreased bone mineral density and increased risk of osteoporosis. Women with raised tHcy levels also have an increased risk of having suffered from pregnancy complications and an adverse pregnancy outcome. Significant associations between tHcy and clinical outcomes are usually observed for tHcy levels > 15 micromol/L, but for most conditions, there is a continuous concentration-response relation with no apparent threshold concentration. Overall, the findings from HHS indicate that a raised tHcy level is associated with multiple clinical conditions, whereas a low tHcy level is associated with better physical and mental health.