2018 Guidelines for the management of dyslipidemia 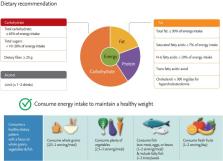 Physical Activity and Public Health: Updated Recommendation for Adults From the American College of Sports Medicine and the American Heart Association

William Haskell,  I-Min Lee,  Russell R. Pate … (2007)
In 1995 the American College of Sports Medicine and the Centers for Disease Control and Prevention published national guidelines on Physical Activity and Public Health. The Committee on Exercise and Cardiac Rehabilitation of the American Heart Association endorsed and supported these recommendations. The purpose of the present report is to update and clarify the 1995 recommendations on the types and amounts of physical activity needed by healthy adults to improve and maintain health. Development of this document was by an expert panel of scientists, including physicians, epidemiologists, exercise scientists, and public health specialists. This panel reviewed advances in pertinent physiologic, epidemiologic, and clinical scientific data, including primary research articles and reviews published since the original recommendation was issued in 1995. Issues considered by the panel included new scientific evidence relating physical activity to health, physical activity recommendations by various organizations in the interim, and communications issues. Key points related to updating the physical activity recommendation were outlined and writing groups were formed. A draft manuscript was prepared and circulated for review to the expert panel as well as to outside experts. Comments were integrated into the final recommendation. To promote and maintain health, all healthy adults aged 18 to 65 yr need moderate-intensity aerobic (endurance) physical activity for a minimum of 30 min on five days each week or vigorous-intensity aerobic physical activity for a minimum of 20 min on three days each week. [I (A)] Combinations of moderate- and vigorous-intensity activity can be performed to meet this recommendation. [IIa (B)] For example, a person can meet the recommendation by walking briskly for 30 min twice during the week and then jogging for 20 min on two other days. Moderate-intensity aerobic activity, which is generally equivalent to a brisk walk and noticeably accelerates the heart rate, can be accumulated toward the 30-min minimum by performing bouts each lasting 10 or more minutes. [I (B)] Vigorous-intensity activity is exemplified by jogging, and causes rapid breathing and a substantial increase in heart rate. In addition, every adult should perform activities that maintain or increase muscular strength and endurance a minimum of two days each week. [IIa (A)] Because of the dose-response relation between physical activity and health, persons who wish to further improve their personal fitness, reduce their risk for chronic diseases and disabilities or prevent unhealthy weight gain may benefit by exceeding the minimum recommended amounts of physical activity. [I (A)]

Coronary calcium as a predictor of coronary events in four racial or ethnic groups.

Karol Watson,  Daniel O’Leary,  Robert Detrano … (2008)
In white populations, computed tomographic measurements of coronary-artery calcium predict coronary heart disease independently of traditional coronary risk factors. However, it is not known whether coronary-artery calcium predicts coronary heart disease in other racial or ethnic groups. We collected data on risk factors and performed scanning for coronary calcium in a population-based sample of 6722 men and women, of whom 38.6% were white, 27.6% were black, 21.9% were Hispanic, and 11.9% were Chinese. The study subjects had no clinical cardiovascular disease at entry and were followed for a median of 3.8 years. There were 162 coronary events, of which 89 were major events (myocardial infarction or death from coronary heart disease). In comparison with participants with no coronary calcium, the adjusted risk of a coronary event was increased by a factor of 7.73 among participants with coronary calcium scores between 101 and 300 and by a factor of 9.67 among participants with scores above 300 (P<0.001 for both comparisons). Among the four racial and ethnic groups, a doubling of the calcium score increased the risk of a major coronary event by 15 to 35% and the risk of any coronary event by 18 to 39%. The areas under the receiver-operating-characteristic curves for the prediction of both major coronary events and any coronary event were higher when the calcium score was added to the standard risk factors. The coronary calcium score is a strong predictor of incident coronary heart disease and provides predictive information beyond that provided by standard risk factors in four major racial and ethnic groups in the United States. No major differences among racial and ethnic groups in the predictive value of calcium scores were detected. Copyright 2008 Massachusetts Medical Society.