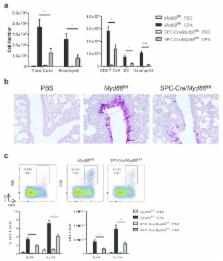 Stephanie C. Eisenbarth,  Damani Piggott,  James W. Huleatt … (2002)
Allergic asthma is an inflammatory lung disease initiated and directed by T helper cells type 2 (Th2). The mechanism involved in generation of Th2 responses to inert inhaled antigens, however, is unknown. Epidemiological evidence suggests that exposure to lipopolysaccharide (LPS) or other microbial products can influence the development and severity of asthma. However, the mechanism by which LPS influences asthma pathogenesis remains undefined. Although it is known that signaling through Toll-like receptors (TLR) is required for adaptive T helper cell type 1 (Th1) responses, it is unclear if TLRs are needed for Th2 priming. Here, we report that low level inhaled LPS signaling through TLR4 is necessary to induce Th2 responses to inhaled antigens in a mouse model of allergic sensitization. The mechanism by which LPS signaling results in Th2 sensitization involves the activation of antigen-containing dendritic cells. In contrast to low levels, inhalation of high levels of LPS with antigen results in Th1 responses. These studies suggest that the level of LPS exposure can determine the type of inflammatory response generated and provide a potential mechanistic explanation of epidemiological data on endotoxin exposure and asthma prevalence.

David Rosenstreich,  Peyton Eggleston,  Meyer Kattan … (1997)
It has been hypothesized that asthma-related health problems are most severe among children in inner-city areas who are allergic to a specific allergen and also exposed to high levels of that allergen in bedroom dust. From November 1992 through October 1993, we recruited 476 children with asthma (age, four to nine years) from eight inner-city areas in the United States. Immediate hypersensitivity to cockroach, house-dust-mite, and cat allergens was measured by skin testing. We then measured major allergens of cockroach (Bla g 1), dust mites (Der p 1 and Der f 1), and cat dander (Fel d 1) in household dust using monoclonal-antibody-based enzyme-linked immunosorbent assays. High levels of exposure were defined according to proposed thresholds for causing disease. Data on morbidity due to asthma were collected at base line and over a one-year period. Of the children, 36.8 percent were allergic to cockroach allergen, 34.9 percent to dust-mite allergen, and 22.7 percent to cat allergen. Among the children's bedrooms, 50.2 percent had high levels of cockroach allergen in dust, 9.7 percent had high levels of dust-mite allergen, and 12.6 percent had high levels of cat allergen. After we adjusted for sex, score on the Child Behavior Checklist, and family history of asthma, we found that children who were both allergic to cockroach allergen and exposed to high levels of this allergen had 0.37 hospitalization a year, as compared with 0.11 for the other children (P=0.001), and 2.56 unscheduled medical visits for asthma per year, as compared with 1.43 (P<0.001). They also had significantly more days of wheezing, missed school days, and nights with lost sleep, and their parents or other care givers were awakened during the night and changed their daytime plans because of the child's asthma significantly more frequently. Similar patterns were not found for the combination of allergy to dust mites or cat dander and high levels of the allergen. The combination of cockroach allergy and exposure to high levels of this allergen may help explain the frequency of asthma-related health problems in inner-city children.

Gregory Saenz,  Eric Taylor,  David Artis (2008)
There is compelling evidence that epithelial cells (ECs) at mucosal surfaces, beyond their role in creating a physical barrier, are integral components of innate and adaptive immunity. The capacity of these cells to license the functions of specific immune cell populations in the airway and gastrointestinal tract offers the prospect of novel therapeutic strategies to target multiple inflammatory diseases in which barrier immunity is dysregulated. In this review, we discuss the critical functions of EC-derived thymic stromal lymphopoietin (TSLP), interleukin-25 (IL-25), and IL-33 in the development and regulation of T-helper 2 (Th2) cytokine-dependent immune responses. We first highlight recent data that have provided new insights into the factors that control expression of this triad of cytokines and their receptors. In addition, we review their proinflammatory and immunoregulatory functions in models of mucosal infection and inflammation. Lastly, we discuss new findings indicating that despite their diverse structural features and differential expression of their receptors, TSLP, IL-25, and IL-33 cross-regulate one another and share overlapping properties that influence Th2 cytokine-dependent responses at mucosal sites.