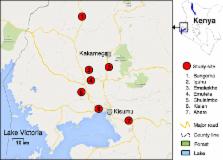 Indoor residual spraying (IRS) and long-lasting insecticidal nets (LLINs) are the first-line tools for malaria prevention and control in Africa. Vector resistance to insecticides has been extensively studied, however the insecticidal effects of the nets and sprayed walls on pyrethroid resistant mosquitoes has not been studied thoroughly. We evaluated the bioefficacy of LLINs of different ages and lambda-cyhalothrin (ICON 10cs) on the sprayed mud walls for a period of time on malaria vector survivorship.

WHO tube bioassay was performed using diagnostic doses of lambda-cyhalothrin (0.05 %), permethrin (0.75 %) and deltamethrin (0.05 %). Cone bioassays were conducted on netting materials from 0 to 3 years old long-lasting insecticide-impregnated nets. Wall bioassays were performed monthly on mud slabs sprayed with lambdacyhalothrin over a period of seven months. All bioassays used An. gambiae mosquitoes collected from the field and the laboratory susceptible reference Kisumu strain. Concentration of the insecticides on the netting materials was examined using the gas chromatography method. Mosquitoes were identified to species level using PCR and genotyped for the kdr gene mutation frequencies.

WHO bioassays results showed that populations from five sites were highly resistant to the pyrethroids (mortalities ranged from 52.5 to 75.3 %), and two sites were moderately resistant to these insecticides (80.4 – 87.2 %). Homozygote kdr mutations of L1014S ranged from 73 to 88 % in An. gambiae s.s. dominant populations whereas L1014S mutation frequencies were relatively low (7–31 %) in An. arabiensis dominant populations. There was a significant decrease ( P < 0.05) in mosquito mortality with time after the spray with both lambda-cyhalothrin (75 % mortality after six months) and with the age of LLINs (60 % mortality after 24 month). Field collected mosquitoes were able to survive exposure to both IRS and LLINs even with newly sprayed walls (86.6–93.5 % mortality) and new LLINs (77.5–85.0 % mortality), Wild mosquitoes collected from the field had significantly lower mortality rates to LLINs (59.6–85.0 %) than laboratory reared susceptible strain (100 %). Insecticide concentration decreased significantly from 0.14 μg/ml in the new nets to 0.077 μg/ml in nets older than 18 months ( P < 0.05).

This study confirms that insecticide decay and developing levels of resistance have a negative contribution to reduced efficacy of ITN and IRS in western Kenya. These factors contribute to decreased efficacy of pyrethroid insectides in ongoing malaria control programs. In order to mitigate against the impact of insecticide resistance and decay it is important to follow the WHO policy to provide the residents with new LLINs every three years of use while maintaining a high level of LLINs coverage and usage. There is also need for urgent development and deployment of non-pyrethroid based vector control tools.

Identification of single specimens of the Anopheles gambiae complex by the polymerase chain reaction.

Bridget Collins,  William Brogdon,  John Scott (1993)
A ribosomal DNA-polymerase chain reaction (PCR) method has been developed for species identification of individuals of the five most widespread members of the Anopheles gambiae complex, a group of morphologically indistinguishable sibling mosquito species that includes the major vectors of malaria in Africa. The method, which is based on species-specific nucleotide sequences in the ribosomal DNA intergenic spacers, may be used to identify both species and interspecies hybrids, regardless of life stage, using either extracted DNA or fragments of a specimen. Intact portions of a mosquito as small as an egg or the segment of one leg may be placed directly into the PCR mixture for amplification and analysis. The method uses a cocktail of five 20-base oligonucleotides to identify An. gambiae, An. arabiensis, An. quadriannnulatus, and either An. melas in western Africa or An. melas in eastern and southern Africa.

Identification of a point mutation in the voltage-gated sodium channel gene of Kenyan Anopheles gambiae associated with resistance to DDT and pyrethroids.

J. Vulule,  Janet Hemingway,  Frank H Collins … (2000)
A field trial of permethrin-impregnated bednets and curtains was initiated in Western Kenya in 1990, and a strain of Anopheles gambiae showing reduced susceptibility to permethrin was colonized from this site in 1992. A leucine-phenylalanine substitution at position 1014 of the voltage-gated sodium channel is associated with resistance to permethrin and DDT in many insect species, including Anopheles gambiae from West Africa. We cloned and sequenced a partial sodium channel cDNA from the Kenyan permethrin-resistant strain and we identified an alternative substitution (leucine to serine) at the same position, which is linked to the inheritance of permethrin resistance in the F(2) progeny of genetic crosses between susceptible and resistant individuals. The diagnostic polymerase chain reaction (PCR) developed by Martinez-Torres et al. [(1998) Insect Mol Biol 7: 179-184] to detect kdr alleles in field populations of An. gambiae will not detect the Kenyan allele and hence reliance on this assay may lead to an underestimate of the prevalence of pyrethroid resistance in this species. We adapted the diagnostic PCR to detect the leucine-serine mutation and with this diagnostic we were able to demonstrate that this kdr allele was present in individuals collected from the Kenyan trial site in 1986, prior to the introduction of pyrethroid-impregnated bednets. The An. gambiae sodium channel was physically mapped to chromosome 2L, division 20C. This position corresponds to the location of a major quantitative trait locus determining resistance to permethrin in the Kenyan strain of An. gambiae.