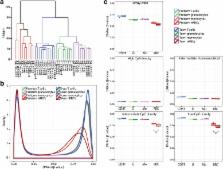 Premature infants are highly vulnerable to infection. This is partly attributable to the preterm immune system, which differs from that of the term neonate in cell composition and function. Multiple studies have found differential DNA methylation (DNAm) between preterm and term infants’ cord blood; however, interpretation of these studies is limited by the confounding factor of blood cell composition. This study evaluates the epigenetic impact of preterm birth in isolated hematopoietic cell populations, reducing the concern of cell composition differences.

Nucleated red blood cells (nRBCs) showed the most extensive changes in DNAm, with 9258 differentially methylated (DM) sites (FDR < 5%, |Δβ| > 0.10) discovered between preterm and term infants compared to the <1000 prematurity-DM sites identified in white blood cell populations. The direction of DNAm change with gestational age at these prematurity-DM sites followed known patterns of hematopoietic differentiation, suggesting that term hematopoietic cell populations are more epigenetically mature than their preterm counterparts. Consistent shifts in DNAm between preterm and term cells were observed at 25 CpG sites, with many of these sites located in genes involved in growth and proliferation, hematopoietic lineage commitment, and the cytoskeleton. DNAm in preterm and term hematopoietic cells conformed to previously identified DNAm signatures of fetal liver and bone marrow, respectively.

This study presents the first genome-wide mapping of epigenetic differences in hematopoietic cells across the late gestational period. DNAm differences in hematopoietic cells between term and <31 weeks were consistent with the hematopoietic origin of these cells during ontogeny, reflecting an important role of DNAm in their regulation. Due to the limited sample size and the high coincidence of prematurity and multiple births, the relationship between cause of preterm birth and DNAm could not be evaluated. These findings highlight gene regulatory mechanisms at both cell-specific and systemic levels that may be involved in fetal immune system maturation.

A comprehensive methylome map of lineage commitment from hematopoietic progenitors

Activation of the Raf-MEK-ERK pathway is required for neutrophil extracellular trap formation.

Heino Prinz,  Alma E. Martínez,  Herbert Waldmann … (2011)
The signaling mechanisms leading to the formation of neutrophil extracellular traps (NETs), relevant in infections, sepsis and autoimmune diseases, are poorly understood. Neutrophils are not amenable to studies with conventional genetic techniques. Using a new chemical genetic analysis we show that the Raf-MEK-ERK pathway is involved in NET formation through activation of NADPH oxidase and upregulation of antiapoptotic proteins. We identify potential targets for drugs addressing NET-associated diseases.