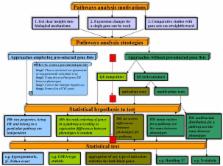 Sorin Drăghici,  Purvesh Khatri (2005)
Independent of the platform and the analysis methods used, the result of a microarray experiment is, in most cases, a list of differentially expressed genes. An automatic ontological analysis approach has been recently proposed to help with the biological interpretation of such results. Currently, this approach is the de facto standard for the secondary analysis of high throughput experiments and a large number of tools have been developed for this purpose. We present a detailed comparison of 14 such tools using the following criteria: scope of the analysis, visualization capabilities, statistical model(s) used, correction for multiple comparisons, reference microarrays available, installation issues and sources of annotation data. This detailed analysis of the capabilities of these tools will help researchers choose the most appropriate tool for a given type of analysis. More importantly, in spite of the fact that this type of analysis has been generally adopted, this approach has several important intrinsic drawbacks. These drawbacks are associated with all tools discussed and represent conceptual limitations of the current state-of-the-art in ontological analysis. We propose these as challenges for the next generation of secondary data analysis tools.

Molecular networks as sensors and drivers of common human diseases.

Eric E. Schadt (2009)
The molecular biology revolution led to an intense focus on the study of interactions between DNA, RNA and protein biosynthesis in order to develop a more comprehensive understanding of the cell. One consequence of this focus was a reduced attention to whole-system physiology, making it difficult to link molecular biology to clinical medicine. Equipped with the tools emerging from the genomics revolution, we are now in a position to link molecular states to physiological ones through the reverse engineering of molecular networks that sense DNA and environmental perturbations and, as a result, drive variations in physiological states associated with disease.

Publisher ID: 10-PLCB-EN-2865
DOI: 10.1371/journal.pcbi.1002053
PMC ID: 3102754
PubMed ID: 21637797
Copyright statement: Emmert-Streib, Glazko. This is an open-access article distributed under the terms of the Creative Commons Attribution License, which permits unrestricted use, distribution, and reproduction in any medium, provided the original author and source are credited.