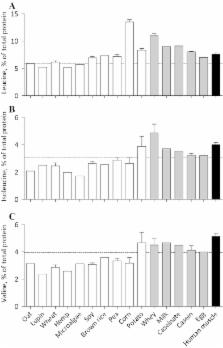 Sestrin2 is a leucine sensor for the mTORC1 pathway.

Rachel Wolfson, Lynne Chantranupong, Robert Saxton … (2016)
Leucine is a proteogenic amino acid that also regulates many aspects of mammalian physiology, in large part by activating the mTOR complex 1 (mTORC1) protein kinase, a master growth controller. Amino acids signal to mTORC1 through the Rag guanosine triphosphatases (GTPases). Several factors regulate the Rags, including GATOR1, aGTPase-activating protein; GATOR2, a positive regulator of unknown function; and Sestrin2, a GATOR2-interacting protein that inhibits mTORC1 signaling. We find that leucine, but not arginine, disrupts the Sestrin2-GATOR2 interaction by binding to Sestrin2 with a dissociation constant of 20 micromolar, which is the leucine concentration that half-maximally activates mTORC1. The leucine-binding capacity of Sestrin2 is required for leucine to activate mTORC1 in cells. These results indicate that Sestrin2 is a leucine sensor for the mTORC1 pathway.

François Mariotti, P Patureau-Mirand, Daniel Tomé (2008)
The protein content in foodstuffs is estimated by multiplying the determined nitrogen content by a nitrogen-to-protein conversion factor. Jones' factors for a series of foodstuffs, including 6.25 as the standard, default conversion factor, have now been used for 75 years. This review provides a brief history of these factors and their underlying paradigm, with an insight into what is meant by "protein." We also review other compelling data on specific conversion factors which may have been overlooked. On the one hand, when 6.25 is used irrespective of the foodstuff, "protein" is simply nitrogen expressed using a different unit and says little about protein (s.s.). On the other hand, conversion factors specific to foodstuffs, such as those provided by Jones, are scientifically flawed. However, the nitrogen:protein ratio does vary according to the foodstuff considered. Therefore, from a scientific point of view, it would be reasonable not to apply current specific factors any longer, but they have continued to be used because scientists fear opening the Pandora's box. But because conversion factors are critical to enabling the simple conversion of determined nitrogen values into protein values and thus accurately evaluating the quantity and the quality of protein in foodstuffs, we propose a set of specific conversion factors for different foodstuffs, together with a default conversion factor (5.6). This would be far more accurate and scientifically sound, and preferable when specifically expressing nitrogen as protein. These factors are of particular importance when "protein" basically means "amino acids," this being the principal nutritional viewpoint.

Yifan Yang, Tyler A Churchward-Venne, Nicholas A Burd … (2012)
Background Increased amino acid availability stimulates muscle protein synthesis, however, aged muscle appears less responsive to the anabolic effects of amino acids when compared to the young. We aimed to compare changes in myofibrillar protein synthesis (MPS) in elderly men at rest and after resistance exercise following ingestion of different doses of soy protein and compare the responses to those we previously observed with ingestion of whey protein isolate. Methods Thirty elderly men (age 71 ± 5 y) completed a bout of unilateral knee-extensor resistance exercise prior to ingesting no protein (0 g), or either 20 g or 40 g of soy protein isolate (0, S20, and S40 respectively). We compared these responses to previous responses from similar aged men who had ingested 20 g and 40 g of whey protein isolate (W20 and W40). A primed constant infusion of L-[1-13 C]leucine and L-[ring-13 C6]phenylalanine and skeletal muscle biopsies were used to measure whole-body leucine oxidation and MPS over 4 h post-protein consumption in both exercised and non-exercised legs. Results Whole-body leucine oxidation increased with protein ingestion and was significantly greater for S20 vs. W20 (P = 0.003). Rates of MPS for S20 were less than W20 (P = 0.02) and not different from 0 g (P = 0.41) in both exercised and non-exercised leg muscles. For S40, MPS was also reduced compared with W40 under both rested and post-exercise conditions (both P < 0.005); however S40 increased MPS greater than 0 g under post-exercise conditions (P = 0.04). Conclusions The relationship between protein intake and MPS is both dose and protein source-dependent, with isolated soy showing a reduced ability, as compared to isolated whey protein, to stimulate MPS under both rested and post-exercise conditions. These differences may relate to the lower postprandial leucinemia and greater rates of amino acid oxidation following ingestion of soy versus whey protein.