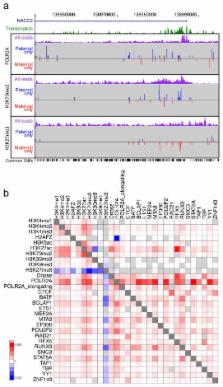 The human genome encodes the blueprint of life, but the function of the vast majority of its nearly three billion bases is unknown. The Encyclopedia of DNA Elements (ENCODE) project has systematically mapped regions of transcription, transcription factor association, chromatin structure, and histone modification. These data enabled us to assign biochemical functions for 80% of the genome, in particular outside of the well-studied protein-coding regions. Many discovered candidate regulatory elements are physically associated with one another and with expressed genes, providing new insights into the mechanisms of gene regulation. The newly identified elements also show a statistical correspondence to sequence variants linked to human disease, and can thereby guide interpretation of this variation. Overall the project provides new insights into the organization and regulation of our genes and genome, and an expansive resource of functional annotations for biomedical research.

Philipp Kapranov, Jill Cheng, Sujit Dike … (2007)
Significant fractions of eukaryotic genomes give rise to RNA, much of which is unannotated and has reduced protein-coding potential. The genomic origins and the associations of human nuclear and cytosolic polyadenylated RNAs longer than 200 nucleotides (nt) and whole-cell RNAs less than 200 nt were investigated in this genome-wide study. Subcellular addresses for nucleotides present in detected RNAs were assigned, and their potential processing into short RNAs was investigated. Taken together, these observations suggest a novel role for some unannotated RNAs as primary transcripts for the production of short RNAs. Three potentially functional classes of RNAs have been identified, two of which are syntenically conserved and correlate with the expression state of protein-coding genes. These data support a highly interleaved organization of the human transcriptome.

Thomas Derrien, Rory Johnson, Giovanni Bussotti … (2012)
The human genome contains many thousands of long noncoding RNAs (lncRNAs). While several studies have demonstrated compelling biological and disease roles for individual examples, analytical and experimental approaches to investigate these genes have been hampered by the lack of comprehensive lncRNA annotation. Here, we present and analyze the most complete human lncRNA annotation to date, produced by the GENCODE consortium within the framework of the ENCODE project and comprising 9277 manually annotated genes producing 14,880 transcripts. Our analyses indicate that lncRNAs are generated through pathways similar to that of protein-coding genes, with similar histone-modification profiles, splicing signals, and exon/intron lengths. In contrast to protein-coding genes, however, lncRNAs display a striking bias toward two-exon transcripts, they are predominantly localized in the chromatin and nucleus, and a fraction appear to be preferentially processed into small RNAs. They are under stronger selective pressure than neutrally evolving sequences—particularly in their promoter regions, which display levels of selection comparable to protein-coding genes. Importantly, about one-third seem to have arisen within the primate lineage. Comprehensive analysis of their expression in multiple human organs and brain regions shows that lncRNAs are generally lower expressed than protein-coding genes, and display more tissue-specific expression patterns, with a large fraction of tissue-specific lncRNAs expressed in the brain. Expression correlation analysis indicates that lncRNAs show particularly striking positive correlation with the expression of antisense coding genes. This GENCODE annotation represents a valuable resource for future studies of lncRNAs.