Isolation and Genotyping of Acanthamoeba spp. as Neglected Parasites in North of Iran 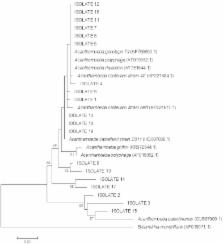 Acanthamoeba, a free-living amoeba, is widely distributed in the environment, water sources, soil, dust, and air. It can cause keratitis in contact lens wearers with poor hygiene and also fatal granulomatous amebic encephalitis (GAE) in immunocompromised hosts. The aim of this study was to gain some insights into the distribution and genotypes of the potentially pathogenic species of Acanthamoeba present in water sources in north of Iran. Total 43 Acanthamoeba species were isolated from 77 water samples taken from different water sources within the Mazandaran province in Northern Iran (Sari city and suburbs). Isolates were identified based on cyst and trophozoite morphological characteristics as well genetics. PCR fragments corresponding to the small-subunit 18S rRNA gene were sequenced for 20 of 43 positive isolates. The results revealed that 83.3% of sequenced isolates belonged to the T4 genotype and the rest belonged to the T2 genotype. Our results indicated that Acanthamoeba is widely distributed in Sari city. As the incidence in Iran of amoebic keratitis has increased in recent years, the exact estimation of the prevalence of this amoeba and its predominant genotype may play a crucial role in prevention of the disease. Sari city has several rivers, seashores, and natural recreational amenities, which attract visitors during the year. This is the first report of Acanthamoeba genotypes from water sources in Sari city, Mazandaran province of Iran, and the results suggest that more attention is needed to protect the visiting population and immunocompromised individuals.

Jolyon Medlock,  Kayleigh Hansford,  Antra Bormane … (2013)
Many factors are involved in determining the latitudinal and altitudinal spread of the important tick vector Ixodes ricinus (Acari: Ixodidae) in Europe, as well as in changes in the distribution within its prior endemic zones. This paper builds on published literature and unpublished expert opinion from the VBORNET network with the aim of reviewing the evidence for these changes in Europe and discusses the many climatic, ecological, landscape and anthropogenic drivers. These can be divided into those directly related to climatic change, contributing to an expansion in the tick’s geographic range at extremes of altitude in central Europe, and at extremes of latitude in Scandinavia; those related to changes in the distribution of tick hosts, particularly roe deer and other cervids; other ecological changes such as habitat connectivity and changes in land management; and finally, anthropogenically induced changes. These factors are strongly interlinked and often not well quantified. Although a change in climate plays an important role in certain geographic regions, for much of Europe it is non-climatic factors that are becoming increasingly important. How we manage habitats on a landscape scale, and the changes in the distribution and abundance of tick hosts are important considerations during our assessment and management of the public health risks associated with ticks and tick-borne disease issues in 21st century Europe. Better understanding and mapping of the spread of I. ricinus (and changes in its abundance) is, however, essential to assess the risk of the spread of infections transmitted by this vector species. Enhanced tick surveillance with harmonized approaches for comparison of data enabling the follow-up of trends at EU level will improve the messages on risk related to tick-borne diseases to policy makers, other stake holders and to the general public.

G Greub,  D Raoult (2004)
Free-living amoebae feed on bacteria, fungi, and algae. However, some microorganisms have evolved to become resistant to these protists. These amoeba-resistant microorganisms include established pathogens, such as Cryptococcus neoformans, Legionella spp., Chlamydophila pneumoniae, Mycobacterium avium, Listeria monocytogenes, Pseudomonas aeruginosa, and Francisella tularensis, and emerging pathogens, such as Bosea spp., Simkania negevensis, Parachlamydia acanthamoebae, and Legionella-like amoebal pathogens. Some of these amoeba-resistant bacteria (ARB) are lytic for their amoebal host, while others are considered endosymbionts, since a stable host-parasite ratio is maintained. Free-living amoebae represent an important reservoir of ARB and may, while encysted, protect the internalized bacteria from chlorine and other biocides. Free-living amoebae may act as a Trojan horse, bringing hidden ARB within the human "Troy," and may produce vesicles filled with ARB, increasing their transmission potential. Free-living amoebae may also play a role in the selection of virulence traits and in adaptation to survival in macrophages. Thus, intra-amoebal growth was found to enhance virulence, and similar mechanisms seem to be implicated in the survival of ARB in response to both amoebae and macrophages. Moreover, free-living amoebae represent a useful tool for the culture of some intracellular bacteria and new bacterial species that might be potential emerging pathogens.

Christopher Schuster,  Hercules Moura,  Govinda S. Visvesvara (2007)
Among the many genera of free-living amoebae that exist in nature, members of only four genera have an association with human disease: Acanthamoeba spp., Balamuthia mandrillaris, Naegleria fowleri and Sappinia diploidea. Acanthamoeba spp. and B. mandrillaris are opportunistic pathogens causing infections of the central nervous system, lungs, sinuses and skin, mostly in immunocompromised humans. Balamuthia is also associated with disease in immunocompetent children, and Acanthamoeba spp. cause a sight-threatening infection, Acanthamoeba keratitis, mostly in contact-lens wearers. Of more than 30 species of Naegleria, only one species, N. fowleri, causes an acute and fulminating meningoencephalitis in immunocompetent children and young adults. In addition to human infections, Acanthamoeba, Balamuthia and Naegleria can cause central nervous system infections in animals. Because only one human case of encephalitis caused by Sappinia diploidea is known, generalizations about the organism as an agent of disease are premature. In this review we summarize what is known of these free-living amoebae, focusing on their biology, ecology, types of disease and diagnostic methods. We also discuss the clinical profiles, mechanisms of pathogenesis, pathophysiology, immunology, antimicrobial sensitivity and molecular characteristics of these amoebae.