Bacterial Genes in the Aphid Genome: Absence of Functional Gene Transfer from Buchnera to Its Host 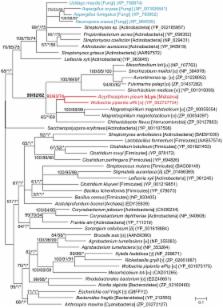 Genome reduction is typical of obligate symbionts. In cellular organelles, this reduction partly reflects transfer of ancestral bacterial genes to the host genome, but little is known about gene transfer in other obligate symbioses. Aphids harbor anciently acquired obligate mutualists, Buchnera aphidicola (Gammaproteobacteria), which have highly reduced genomes (420–650 kb), raising the possibility of gene transfer from ancestral Buchnera to the aphid genome. In addition, aphids often harbor other bacteria that also are potential sources of transferred genes. Previous limited sampling of genes expressed in bacteriocytes, the specialized cells that harbor Buchnera, revealed that aphids acquired at least two genes from bacteria. The newly sequenced genome of the pea aphid, Acyrthosiphon pisum, presents the first opportunity for a complete inventory of genes transferred from bacteria to the host genome in the context of an ancient obligate symbiosis. Computational screening of the entire A. pisum genome, followed by phylogenetic and experimental analyses, provided strong support for the transfer of 12 genes or gene fragments from bacteria to the aphid genome: three LD–carboxypeptidases ( LdcA1, LdcA2,ψ LdcA), five rare lipoprotein As ( RlpA1-5), N-acetylmuramoyl-L-alanine amidase ( AmiD), 1,4-beta- N-acetylmuramidase ( bLys), DNA polymerase III alpha chain (ψ DnaE), and ATP synthase delta chain (ψ AtpH). Buchnera was the apparent source of two highly truncated pseudogenes (ψ DnaE and ψ AtpH). Most other transferred genes were closely related to genes from relatives of Wolbachia (Alphaproteobacteria). At least eight of the transferred genes ( LdcA1, AmiD, RlpA1-5, bLys) appear to be functional, and expression of seven ( LdcA1, AmiD, RlpA1-5) are highly upregulated in bacteriocytes. The LdcAs and RlpAs appear to have been duplicated after transfer. Our results excluded the hypothesis that genome reduction in Buchnera has been accompanied by gene transfer to the host nuclear genome, but suggest that aphids utilize a set of duplicated genes acquired from other bacteria in the context of the Buchnera–aphid mutualism.

Bacterial lineages have repeatedly evolved intimate symbioses with eukaryotic hosts, the most famous cases being those of the cell organelles, mitochondria, and plastids. Symbiont genomes typically lose many ancestral genes, raising the question of how they function with so few genes. In organelles, part of the answer involves gene transfer to the host genome, allowing maintenance of essential functions. So far, the extent of gene transfer to hosts has not been assessed for other cases of intimate, obligate symbiosis. Aphids harbor an ancient coevolved intracellular symbiont, called Buchnera. We used the newly available sequence of the pea aphid genome to conduct an exhaustive computational search for genes of bacterial ancestry. We found that no functional genes have been transferred from Buchnera, ruling out such transfer as a driving force in genome reduction in this symbiont. However, the aphid genome does contain eight transcribed genes of apparent bacterial origin, some of which have been duplicated after transfer. Based on their expression patterns, most of these appear to function specifically in the aphid- Buchnera symbiosis, presenting the possibility that the maintenance of obligate intracellular symbioses can be affected by the acquisition and duplication of genes transferred from unrelated bacterial lineages.

F. Abascal,  R Zardoya,  D Posada (2005)
Using an appropriate model of amino acid replacement is very important for the study of protein evolution and phylogenetic inference. We have built a tool for the selection of the best-fit model of evolution, among a set of candidate models, for a given protein sequence alignment. ProtTest is available under the GNU license from http://darwin.uvigo.es

Kirsty A Douglas (1997)
Most aphids possess intracellular bacteria of the genus Buchnera. The bacteria are transmitted vertically via the aphid ovary, and the association is obligate for both partners: Bacteria-free aphids grow poorly and produce few or no offspring, and Buchnera are both unknown apart from aphids and apparently unculturable. The symbiosis has a nutritional basis. Specifically, bacterial provisioning of essential amino acids has been demonstrated. Nitrogen recycling, however, is not quantitatively important to the nutrition of aphid species studied, and there is strong evidence against bacterial involvement in the lipid and sterol nutrition of aphids. Buchnera have been implicated in various non-nutritional functions. Of these, just one has strong experimental support: promotion of aphid transmission of circulative viruses. It is argued that strong parallels may exist between the nutritional interactions (including the underlying mechanisms) in the aphid-Buchnera association and other insect symbioses with intracellular microorganisms.

Genomics of bacteria and archaea: the emerging dynamic view of the prokaryotic world

Eugene V. Koonin,  Yuri I. Wolf (2008)
The first bacterial genome was sequenced in 1995, and the first archaeal genome in 1996. Soon after these breakthroughs, an exponential rate of genome sequencing was established, with a doubling time of approximately 20 months for bacteria and approximately 34 months for archaea. Comparative analysis of the hundreds of sequenced bacterial and dozens of archaeal genomes leads to several generalizations on the principles of genome organization and evolution. A crucial finding that enables functional characterization of the sequenced genomes and evolutionary reconstruction is that the majority of archaeal and bacterial genes have conserved orthologs in other, often, distant organisms. However, comparative genomics also shows that horizontal gene transfer (HGT) is a dominant force of prokaryotic evolution, along with the loss of genetic material resulting in genome contraction. A crucial component of the prokaryotic world is the mobilome, the enormous collection of viruses, plasmids and other selfish elements, which are in constant exchange with more stable chromosomes and serve as HGT vehicles. Thus, the prokaryotic genome space is a tightly connected, although compartmentalized, network, a novel notion that undermines the ‘Tree of Life’ model of evolution and requires a new conceptual framework and tools for the study of prokaryotic evolution.

Publisher ID: 09-PLGE-RA-2063R2
DOI: 10.1371/journal.pgen.1000827
PMC ID: 2829048
PubMed ID: 20195500
Copyright statement: Nikoh et al. This is an open-access article distributed under the terms of the Creative Commons Attribution License, which permits unrestricted use, distribution, and reproduction in any medium, provided the original author and source are credited.